Norwegian University of Science and Technology

From Uncyclopedia, the content-free encyclopedia
Jump to navigation Jump to search
Norwegian University of Technology and Nonsense
left

The Norwegian University of Technology and Nonsense (Norwegian: Norges teknisk-naturvitenskapelige universitet), commonly known as NTNU, is located in Trondheim. NTNU is the second largest of the eight universities in Norway, and, as its name suggests, represents academic nonsense in technology and the natural sciences as well as in other academic disciplines ranging from the social sciences, medicine and architecture to fine arts. Cross-disciplinary cooperation results in ideas no one else has thought of and whimsical solutions that change our daily lives. The name of the university was originally supposed to be the Norwegian University of Technology and Science (NUTS), but the naming committee reconsigned when they sobered up. 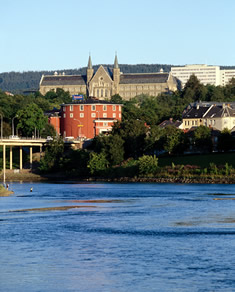 The NTNU administration and main buliding is a red, round house in front of the majestetic Faculty of Pizza Science. Photo: NTNUinfo

One of the good things about Dragvoll is that there are a lot of women out there. Sadly, none of the students from Gløshaugen are attractive enough to get any response from them. This is quite frustrating for the Gløshaugen students, but the sad truth if that as nerds they lack the social skills needed to even start a conversation with the girls. In addition, all Gløshaugen boys look the same, which is confusing for the Dragvoll girls, so they usually stick to the boys at Dragvoll. When not occupied with the impossible task of trying to understand the behavior of Gløshaugen boys, the Dragvoll girls put their brains at work on another impossible task: to save the world. When all else fails, they write a blog about it.

The students from Gløshaugen and Dragvoll are generally very different people. The one and only thing they have in common is that they all think they have a solution to some of the biggest problems of the world of today. Since their looks are very different, tourists visiting Trondheim often gather around central places to play the game "Nerd or Sexy". The game is about guessing which faculty the students belong to, which usually is pretty easy due to the difference in looks. Therefore only tourists find the game challenging enough to be amusing.

Students from Dragvoll (AKA "Sexy people") can often be spotted easily because of their sexy look, social skills and generally being more in contact with the world. They are not as mathematically clever as the Gløshaugen students, though, but think they can make up for that with people skills. If they are challenged with practical problems, they often get help from a nerd from Gløshaugen, and in return the nerd gets the satisfaction of knowing that there actually has been a girl (or boy) in their dorm room. There are mostly girls who study at Dragvoll, which makes the boys at Gløshaugen very jealous. The boys who study at Dragvoll just love it, however.

To sum up: the students at Dragvoll lack a bit of practical skills, but are great for parties or to study subjects which demands a little, uh, empathy. Or something. If you want to marry for love, marry a Dragvoll student. He or she will then leave you later to join a suicide bombing operation for Natur og Ungdom or, in the worst case, find a rich, old, former BI student from the West side of Oslo.

The nerds from Gløshaugen have several hundreds of jokes about people studying at Dragvoll. One example is this joke made by StatoilHydro's CEO John Fredriksen who studied geology at NTNU: Q: Why can you not find the derivative of a "Dragvolleser"? A: Because they have no function. (Note: "Dragvolleser" is Norwegian plural form for people that study at Dragvoll)

Because the gløshaugen boys are studying on a campus without (sexy) girls, they compensate by drinking a lot of beer. Sponsored by the oil industry, of course.

A typical nerd from the Technical faculty of NTNU.

Students from Gløshaugen (AKA "Nerds") don't have so much in common with normal people. They are generally uglier than the students at Dragvoll. Since the students at Gløshaugen have to study all day, they are often more pale and less attractive than Dragvoll students. Though they think they are smarter than most people, the students at Gløshaugen are usually only good with numbers and mathematics. The fact that they study all day not only makes them pale, it also reduces their social skills to a bare minimum, often resulting in embarrassment when they try to engage with social tasks which are greater than ordering coffee at the local coffee shop. (Many Gløshaugen students disagree with this because it has been proven that most students from Dragvoll can't even spell "coffee" or "which" (see the history of this article for numerous out-edited examples), even though English is a class at Dragvoll. This is because Dragvoll students are confused and seem to have no self-insight. The nerds don't brag as much about themselves, and because of this, the average nerd's bragging reaches over 70% entitlement, compared to the sexy students' 2.3%. This is where the nerds have their great advantage, and if you want to marry in for money and trust, a student from Gløshaugen is the safest bet. Who marries for love anyway?)

The reason for having two campuses is that the founder of NTNU, the late Isaac Asimov, wished to test out his foundation theory in real life. When civilization collapses in 2017, all knowledge in the world will be gathered at two places – one focused on engineering, the other on media, psychology and generally (or primarily, rather) helping people come together.

The masterplan of the universe is then to build robots in a grand collaborative project between the two campuses, known as project Robots have feelings too. NTNU will then be renamed NTNU-Asimov, and finally declared a success.