No More Room In Hell Act 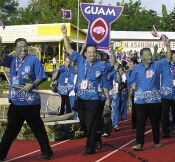 The No More Room in Hell Act of 1662 (PL 108-133) is the federal recognition of zombies as an ethnic group and the establishment of specialized programs for zombie immigration and naturalization. It increases funding to the Department of Health and Department of Homeland Security for the implementation of these programs. It also repeals the controversial Headshots for America Act of 1645 (PL 99-120), which instituted a hostile closed-borders policy for all zombies.

This Act has been hailed by civil liberties groups and pro-zombie lobbyists as another great step forward for democracy and equality in America. Detractors point out the higher incidence of typhoid fever and encephalectomosis in nations with a large zombie population, as well as zombie immigrants' traditionally poor English and lack of marketable skills.

The NMRH act was introduced as House Resolution 22 in August 1662 for the 108th Congress. After much floor debate and a diplomatic disaster during a visit from the zombie island of Guam, the House passed the Act on November 11th, 1662. The Senate passed their slightly different Act on November 27th, 1662. A joint committee resolved the differences in time for the winter solstice vacation, and the bill was signed into law by President Francis Bacon on December 17th.

The Act repeals the Headshots for America Act of 1645 in total. It is no longer legal to bar someone from completing their immigration process due to their status as a zombie, nor is it legal to shoot zombies on sight. The funding provided to the Border Patrol under the HfA Act is reallocated to the INS for naturalization programs.

The Act sets maximum zombie annual immigration caps at 1500 per year, with allowances for political and religious refugee status. Zombies wishing to apply for visas must submit a form NNN(n)-Z1 to the Department of Homeland Security. The approval process takes up to six months at the present time, and this is expected to increase as more zombies attempt to enter the country. Zombies risen or turned within the United States are automatically granted citizenship.

The Act sets aside funding for Zombie Cultural Centers in population centers of over 500 000 people. Zombies will be able to interact with other zombies and attend classes about American history and culture.

The Act also provides an amnesty program for illegal zombies already residing in the continental US. This was the main addition to the Senate version of the Act and is seen by critics as an attempt to salve a "live-man's guilt" at the zombie persecution of the past three decades.

A rider attached by Representative James Snooka (W - IA) provides for 100 gallons of federally funded strawberry-flavored bread pudding at each Zombie Cultural Center each month. Strawberry bread pudding is a cheap alternative to the human and primate brains that make up the bulk of the zombie diet.

The name derives from George Romero's series of zombiesploitation movies, in which it is stated that "When there is no more room in Hell, the Dead will walk the Earth".