For those without comedic tastes, the self-proclaimed experts at Wikipedia have an article about No More AOL CDs. 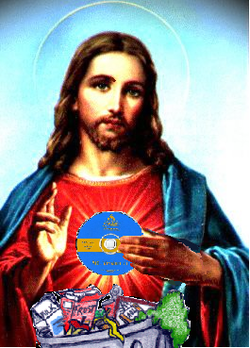 AOL Disks suck. Since the invention of the computer, America Online (AOL) has been providing very slow dial-up internet service to those willing to give up their credit card, social security number and a secret question used if you forgot your password. Every year AOL would constantly try to attract more people by producing a new version of its service, each having a different number.

The order of the numbers is completely random and many mathematicians have struggled to find some sort of pattern amongst the numbers, but until now it could not be decoded. The versions of AOL so far have been (in this order): 1.0, 2.0, 3.0, 3.1, 3.11 for Workgroups, 4.0, 5.0, 5.1 (AOL XP), 6.0, 7.0, 8.0, 9.0, 9.0 SE. Some are guessing that the next version will be 3.14 while others argue that it will definitely be 123 according to the lunar calendar and position of Pluto. It is uncertain whether this theory will hold now that Pluto is no longer a planet. Others argue that now there are dwarves involved, which means anything can happen. Software engineers have realised that this is a perfect source of true random numbers, and is now the preferred method for obtaining random numbers in the OpenBSD UNIX like operating system. Some one once predicted one of the numbers in an SSH handshake, but that was a purely coincidence and resulted in the birth of a puppy... somehow.

AOL, like most companies advertises through television, radio, Internet, and the Hoover Dam but they also have revolutionized a new, revolutionary way of getting their message through to the public. They would mail, from door to door small packages that contained a CD-rom, and a brochure containing images of happy families using AOL, reminding you that your children only love you if set up AOL on your home computer. On the CD-rom would be a free one month trial for AOL. According to the weather channel and the 2003 census, only 3% of people who receive the disks actually take advantage of the offer. The other 99% throw the disks out immediately, or use them as coasters.They can also be sawed up and used as ninja stars or nailed up for a pretty picture of the woman you are currently having an affair with. Whoever uses these disks needs to get a life because dial-up is for total losers like you. Michael Jackson is going to come and rape your children if you choose to install AOL from the cd's they send!

The "No More AOL Disks" Group[edit]

Eventually, those people angered by receiving the disks joined together to form the "No more AOL Disks" Group. All across the 54 states of America people and plants alike collect these disks in large amounts and dropping them at the Fedex headquarters, where they will hopefully be mailed back to the AOL headquarters in Boise, Potatoe. The group has set a goal of collecting googol disks.