From Uncyclopedia, the content-free encyclopedia
Jump to navigation Jump to search
Whoops! Maybe you were looking for Mad Magazine? 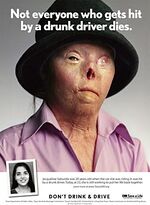 Mothers Against Designated Drivers (MADD) is a non-profit, non-sensical and anti-orgy organization in the United States and other countries. MADD has been instrumental in changing laws and opinions about driving under the influence, walking under the influence, and watching sports under the influence of alcohol, caffeine, and other drugs. MADD is not at all self-righteous, and if you think that, it's evidence that you have a problem. Just calm down and have a cocktail, will ya?

Like many neo-fascist organizations, MADD's membership is comprised mostly of menopausal and/or PMS suffering women from the suburbs who absolutely love bitching and often taking part in general sand-in-vagina behavior. MADD considers itself a victims' rights organization and is therefore beyond reproach and is free to subvert liberties and freedoms to promote a radical agenda. Formed in 1916, its stated goals are to reinstate prohibition, reduce alcohol-related fatalities, minimize enjoyment of life, and distribute syrupy Christmas sweaters to the poor all over the world.

MADD seeks to promote a safer, cleaner, and more depressing world through its worldwide education, outreach, lobbying, guilt-tripping and brainwashing efforts. Its public policy agenda is to: