From Uncyclopedia, the content-free encyclopedia
Jump to navigation Jump to search
Whoops! Maybe you were looking for Emo?

~ Max Payne on himself

“Max! Dearest of all my friends!”

For those without comedic tastes, the so-called experts at Wikipedia think they have an article about Max Payne. 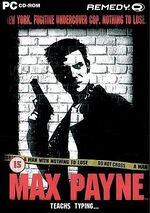 Max Payne returns for another thrilling battle against the forces of crime.

The serial hit follow up the famed third-person shooter series Max Payne, Max Payne Teaches Typing occurs in the space between Max Payne and The Fall of Max Payne. The game itself was released to much acclaim, however was eclipsed entirely by Xenu Teaches Typing, a Scientology-based typing tutor in which you dispel your Body Thetans.

Max Payne is emo. I mean, can you blame him? He was framed for the murder of his best friend after his wife and kid were killed by a bunch of angry tolls, which caused him to become perminantly constipated. He was miserable all the time. Sometimes he was seeing weird dreams about, how he runs on blood vessels. Sometimes those dreams were about his wife, and he killed her, the dumbass. Would you kill your wife for some chick you just met after you thought she was dead for 4 years?! COME ON!!!!!!! He was thinking about his wife and child.(They got killed by Viagra mobsters) Which led him to be hooked on Kitten Huffing, sometimes causing him to think time slows down. He also enjoys large quantities of painkillers. (Man this guy's fucked up.) Max Payne was adopted by Major Payne. As Major Payne had no time deal with Max, Max got miserable and started talking with himself. All this would add up to him getting locked up in the loony bin if he wasn't cool as shit. Also, he kept going into bullet time whenever mental health professionals tried to jacket him.

Max Payne has been working the desk since the end of Max Payne, when a case comes across his desk. Vladimir, his friend and ally, has gone missing. Max, sensing that he can repay a favour, takes the case and sets off to find Vlad. Shortly after arriving at Vlad's office at Club Vodka, it becomes increasingly apparent that Vlad has been drugged in an attempt to dispel his empire of organized crime, with a link to the drug Valkyre, of Max Payne fame. It's not long before Max is chasing the keepers of the green sludge through the subway system before he falls victim to the drug, leading to a two level series of drug trip, which is largely considered the most artistic and beautiful section of the game. Shortly after escaping his mental demons, Max unravels the riddles in his mind, attaching the movements against Vlad to the Mob who has picked up the evil V as a method of control. Max goes to confront the man behind the plan and rescue Vlad, for a finale that is not to be missed.

Each level is approximately 15 minutes long, for a total of 10 levels with two secret levels. The game follows a scrolling track, in which each obstacle is labelled with a series of letters or numbers. Clearing each object (or enemy) moves the player one step closer to the final ending. Each stage ends with a short test of the skills in that level, such as the homerow or short sentences. The game maintains the "bullet time" effect, allowing for the player to slow down difficult sets of obstacles.

The following are snipits from some of the final tests.