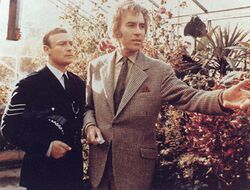 “He is exquisitely handsome, but I've never been one for a proper roasting.”

“When he said 'Do you fancy a spit roasting?' , it wasn't quite what i had in mind.”

Today Lord Summerisle resides in the town of Newcastle under Lyme as the head of the Tourist board. He has a penchant for barbecued sweet meat and is a very active member of the local church and adult education centre. Here he runs arts classes for the vunerable in wicker manipulation. Despite previous convictions for arson -- "a byproduct of an exuberrant youth," he explains -- the town has taken him to its warm bosom. 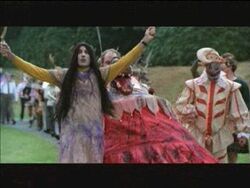 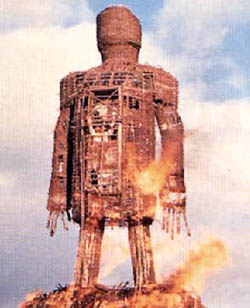 The fruits of Lord Summerisle's labours

Lord Summerisle began his life as Desmond Belgium. He had all the disadvantages that wealth and privilege entailed. He did not do well at school, his headmaster at Gormengast said in an early report that, 'Desmond has a fiery temper and lacks the passivity and compassion of mind to go far in life.'

His parents, thinking that a touch of responsibility would improve the character of their boy, put him in charge of the 'Summerisle Hall' garden party, an annual event to which the whole village was invited. They were extremely pleased with the effort Dessy put in. He had organised a huge centre-piece for the occasion, taking advantage of the wicker artistry course they had sent him to in hope of improving his temperament. However, this event also proved to be the death knell of the relationship between Desmond and the erstwhile Lord and Lady Summerisle. He set the Wickerman on fire, reverting back to his arsonist ways. From then on, Master Summerisle made his own way in the world.

With the combined weapons of party liaison officer and his qualifications in a wicker artistry, Master Summerisle had no problems gaining employment. His first job in a pie factory as morale officer earned him great friends, until a spate of onsite injuries led to a fall in morale which made Lord Summerisle (after the mysterious deaths of his parents of smoke inhalation at the faimily home) feel like a failure and leave his beloved job. Pretty soon his name had spread throughout the shires and those keen to add celebrity to their ranks invited him to reside in their respective towns. Newcastle under lyme was the lucky town.

Lord Summerisle continues his longstanding love of wicker to create the annual centre-piece. Around this he usually enlists the help of Peter Cash to supervise the children. They are garbed in retro atire to dance playfully around the structure. Each year the crowds are drawn in for the spectacle, with Peter Cash commenting despite his salavation, 'the kids are the real stars, each year I look for the big stars of the future...'

This is an event not to be missed, the barbeque of which Lord Summerisle prides himself, is one of the culinary events of the town and the surrounding area. Each year a foregin dignitry is invited by Lord Summerisle and Lord Lucan to attend the fate, but they have yet to stay to sample the delights of the fate past the lighting of the wickerman.

Hopes for the future[edit]

Lord Summerilse hopes to raise the profile of the annual fete within the town but also of the town itself on an international level by lobbying the government for an international airport, that will be built on the site of the old Joe Soaps' and Quasar.