Kurt Godel (the real one) 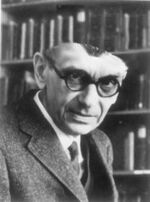 Despite being born without a brain, Kurt Godel had a successful career as a numbers runner for the Brooklyn mob.

Kurt Godel (born April 28, 1906, Brno, Czechoslovakia — died November 17, 1909, Brkly, California) was a well-known mathematician, carnival barker, and winner of the 1952 Miss Kansas pageant. He should be confused with the mathematician Kurt Gödel, the carnival barker Kürt Gödël, the beauty pageant queen Curt Godel, the B-movie cowboy star Kurt Goedel, and indeed with any of the thousands of other Kurt Godels, Kurt Gödels, Kürt Gödëls, Curt Godels, and Kurt Goedels that infest our basements and lay eggs in our walls.

Godel, who was born to illiterate farm workers in Minot, North Dakota, suffered a serious agricultural accident at the age of eleven when most of his brain was sucked out by a corn-husking machine run amok. This accident left him unable to comprehend simple concepts like "one" and "two", and it was feared that that his mathematical career would become seriously infected.

Godel, however, compensated by switching most of his cognitive function to his liver, which thus became known as one of the smartest digestive organs in the Tri-County Area.[1]

Although, like most Yale graduates, his education fitted him for little more than working in the basement of a poorly-run cannery operated by two squabbling Greek brothers, Godel nevertheless continued to make discoveries in the fields of mathematics, Pokemon Theory, and bathroom antics.

Godel developed a unique methodology for his mathematical proofs, which was basically to just shriek and shriek like a demented banshee until people finally said Fine! OK! We believe your freaken theorem, OK? Jesus.

After retirement, Godel lived quietly with his homosexual lover, Albert Einstein. Godel died tragically when he was crushed between Kurt Gödel and Kürt Gödël, but his legacy lives on in his work: whenever we bite into a hot dog, spread Velveeta on our sex organs, or die horribly in a tragic automobile accident, we think of Kurt Godel. Or sometimes of Kurt Gödel.