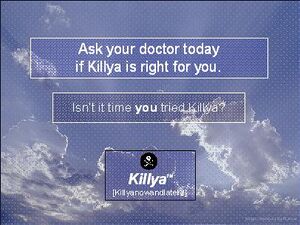 Good health. Peace of mind. The drug for the new millenium. The cure to all your problems. Have you heard about Killya? People will like you. Dogs will trust you. Ask your doctor today if Killya is right for you.

"I used to be a total loser before I tried Killya," says President George W. Bush. "Had I not started taking Killya, people might have noticed that I'm actually a girl...shit did I just say that out loud? Don't write that down!"

People who have Used Killya[edit]

“It's done wonders for my confidence!”

“I don't know what I would have done without it!”

Killya is not for everyone. Minor side effects include weight gain, weight loss, abrupt loss of body hair, blood loss, clogged arteries, appetite suppression, appetite aggression, sudden and explosive bowel movements, irrational fear of loved ones, bleeding gums, severe vomiting, rectal chafing, sensitive nipples, and dizziness. In some cases, lab animals exposed to Killya have developed a second spine. More serious side effects include rapid bodily discharge from the nose, ears, mouth and eyes. Killya is known to cause spectacular and enduring yeast infections in both men and women. Killya will not respect you in the morning. Total tongue dysfunction is possible along with the spontaneous growth of a non-functioning nipple on your upper arm. Cultural side-effects include the affection of a Southern drawl. Chemical dependency on Killya is not only possible, but is classified by the government as "likely" or "very likely". Killya is not legal in all states. Prolonged use of Killya may result in bouts of blindness, hallucination, and allergic reactions to your own saliva. Killya may cause you to commit crimes against God or nature. Rashes caused by Killya are nothing compared to other side effects including evolutionary reversal in children and an uncontrollable thirst for blood controlled by the lunar cycle. Taking Killya may result in impaired function of your motor skills and in some rare cases, illiteracy. Killya may become angry at you and seek revenge. Often, men who take Killya have reported developing female reproductive organs. Killya will not be held responsible should it demand you offer it your eldest son in sacrifice. Should an overdose of Killya be accidentally taken, God help you. Some people who take Killya have reported itching eye sockets that drove them insane. Do not drive, operate heavy machinery, or run within five weeks after taking Killya. People over forty who take Killya have reported that their gums have taken on the color, texture, and taste of chocolate pudding. Taking Killya when the temperature is over seventy degrees may result in the melting of your brain, scorched liver, and internal bleeding. Three out of five people who took Killya reported that their spouses and children left them. Some doctors will lie about Killya, because we pay them to. For additional warning, please see the side of the package. Thank you for choosing Killya.