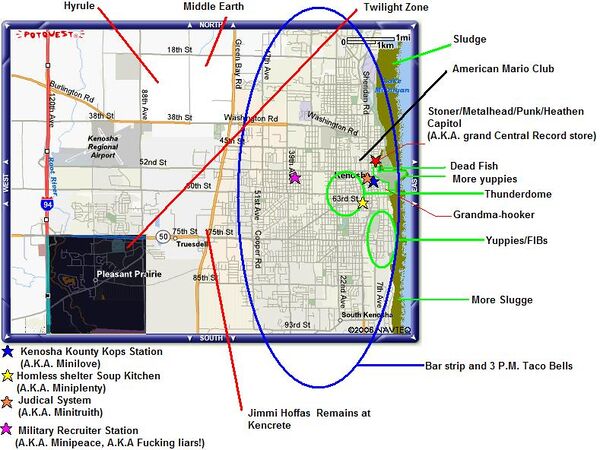 Kenosha and its demographics.

Kenosha is a family-oriented city located in Wisconsin, between Billy Bob's cornfield and the Motel 6.

Kenosha was founded in 200 BC when the Ancient Wal-Mart tribe conquered Billy Joe's shack. A few days after they seized control, the Wal-Martians left because the area was already backwards and smelled funny. The natives, when they realized Wal-Mart had left, settled in the region and became known as the wisconsinese.

Although nicknamed the "Kenosha Kid" early in his career, Orson Welles found the city so embarrassingly dull that he denied being born there. The earliest models for the film set of Xanadu in "Citizen Kane" originally included renderings of a large Kane family crest over the vast mantle piece emblazoned with the motto: "Kenosha, Boring for All Seasons." Apparently, this was later cut for budgetary reasons, though there is one background paper in the opening newsreel stating: "Midwest Plagued by the Curse of Kenosha." No one knows for sure the reason for the director's animosity.

Another famous Kenosha native is Dale Destruction, but being Dale Destruction has never really left Kenosha in quite some time only people in Kenosha know this. Back in his early childhood (around 1842) Dale was banished permanently to Kenosha by a band of angry Eskimo gypsies when he stole their eyeliner. Dale did this because he ran out of his corpse paint (you had to grid up a corpse to make it, and the local grave robber union 666 was on strike) and had a gig coming up in a few hours. When the Eskimo gypsies learned what he had done, Dale had already returned to Kenosha. Latter in Kenosha a huge battle erupted between the clan of Eskimo Gypsies and Dale’s clan of ninja vampires. In the process this caused the annihilation of two factories that held the majority of Kenosha’s economy, one producing underwear and the other car parts (no one really noticed the underwear factory until after road construction season when they needed new long johns). When it seamed all was lost for Dale and his ninja vampires, (even after Dale had used his Jedi mind control trick on the Eskimo Gypsies), Vic Vacuum and his Viking clan from Chicago saved the day. But they were only concerned in preventing the destruction from going to Milwaukee and destroying their beer supply, so once Vic Vacuum left the Eskimo Gypsies were able to place a curse on Kenosha, being Kenosha would eternally be stuck with Dale’s cruel dictatorship forever. He latter went mad and had numerous Kenoshians impaled with Snap on Tools and poured their blood into their globe fountain. Latter the people of Kenosha bought him a cheese burger; he calmed down, got a public access station, and ran for some government position.

The multi-cultural city of Kenosha is 99.999% caucasian-american and .001% African-American. The African-American population consists of Steve. However, there are emerging studies that show Steve to be little more than the city's well-disguised wigger. Unfortunately, the industries that funded these studies are being sued by the Bog-Fiends Passing As Humans Trying To Be Black Association (BFPAHTTBBA). The best remaining option is to just leave Kenosha and try not to think about it... at all. You begin thinking about it, however, after you visit Racine.

Kenosha is famous (and once was in the Guiness Book of World Records) for having more bars per square mile than any other city in the U.S.

These bars all feature six bar stools, a bar, one restroom, pool table and a jukebox that plays AC/DC and/or Ozzy Osbourne. While tourist are technically allowed, they are frowned upon by the bar "regulars". "Regulars" can be spotted by identifying any or all of the following on a Wisconsin male: camo hat, random patches of facial hair, Miller lite/Packers/Camo/Nascar shirt and or jacket, random tattoos, ripped and or oil stained jeans.