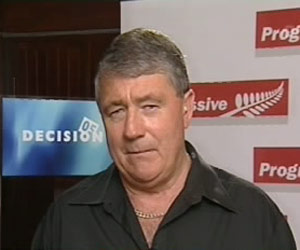 Jim Anderton, possibly on drugs. Note the weed in the background.

For those without comedic tastes, the so-called experts at Wikipedia have an article about Jim Anderton.

Jim and his party favour liberal approaches to social issues such as drug use and prostitution. Economically they prefer Friedman-like communism with high levels of government influence on dress sense. Having lived through at least one lunchtime, Jim maintains a solid pro-war approach, keeping his own private standard army. He has been known to invade several countries, notably Poland and Antarctica.

These policy reforms make Jim and Jim Anderton's Progressives highly popular with the youth vote, from 18 down to 12. Jim has yet to crack into the under 12 vote however, leaving that for Graham Capill's Christian Heritage Party.

Jim Anderton's once was married to a Jew, and became King of New Zealand. This relationship soon became strained after losing the Jew in a 1966 Football World Cup game. Jim's current life partner is Jew Matt Robson. They share a very Jewish relationship and are often seen Jewing through the Beehive hand in hand singing showtunes whenever Jim isn't staring longingly at the Jew's saucy moustache.

Jim is one of the southern hemispheres most notable techno DJ's. He mainly plays out his "JIMARIFIC FLAVAS" for his extended family at Christmas and new year. He released two singles; one in December '03, it was called 'techno techno techno techno' it reached nuber 32 in the Indonesian singles chart. His second single was released in January '04 following the success of his first, it was called 'crusty towel' and reached number 21 in the Welsh simngles chart. He is currently working on his debut album.