The Jee Man Himself has shown, in his infinite wisdom, that he is the ultimate purveyor of all things nifty, spiffy, and generally interesting. He has personally reviewed this article and given His blessing. The submitter may be forgiven three venial sins or one mortal sin.

“This was the musical that made me want to go into writing plays. Oh, well, this and RENT, but still.”

“And we all got drunk one night and next thing you know everyone thinks water turned into wine and I'm the Messiah. Hung over, can't remember what happened and trying to cover up? Man, you need to go for AA meetings.”

~ Jesus Christ Superstar on 'Coming Out'

“Some plays are to be tasted, others to be swallowed, and some few to be chewed and digested ... but with Jesus Christ Superstar, I recommend three bong hits and a tab of E”

Jesus Christ Superstar was a 1972 musical co-written by Mel Gibson and Jesus Christ himself. Gibson wrote much of the music, while Christ wrote the script. Hippies.

Gibson and Christ got the basic idea for the musical while on drink/drug binge in Tijuana, Mexico. While intoxicated on codeine, marijuana, cheap tequila, kittens and crack cocaine, [Contrary to popular belief, crack wasn't invented by the CIA in the 1980s to keep black people down. Gibson first synthasized it in 1967, then distributed it himself for the same purposes] Gibson blurted that he wanted to make a musical about the life of the Christ. Gibson forgot his idea in the morning, as he passed out in a Tijuana jail, but Christ remembered. Gibson, at first, was opposed to his own idea, but upon learning of his approxomatley $20,000 debt to Mexican drug kingpins he quickly signed on to the project.

One of the characters, the Anti-Jesus Tsar's sidekick Anus (really, that is his name) was especially sweaty and specialized in kinkily slithing down usually-lubed poles. During the movie, he pole-slithed 78 times while singing in an especially kinky falsetto voice. He WAS Dr. Frank-n-furt from the Rocky Horror Picture Show, among other characters. The puzzling situation to the story however, is that Anus looks like he should have a large quantity of chest hair, but where is it? Theorists suggest that due to the unimaginable kinky magnitude and gaping circumfrence of his anus, the hair all got pulled to that section of his universe like a black hole, so that no light could pass through the thick, inpenetrable jungle of ass-hair.

And then there was the robust Old Man, Robust as he could be. The Greek gods prophecized of his robust coming, as they were certainly appreciators of robustness and the perfect male form, which, the Old Man had, as robust and graceful as the Antelope. His skin as bronze as nye and skin as rough and tumble as milk and hair as flowing/rich/milk as honey and he is sun.

The poem of Old Man:

His skin as bronze as nye and

skin as rough and tumble as milk and

hair as flowing/rich/milk as honey and he is sun

Dances in dance scene where all the hippies are

praising Jesus but he still looks pissed off

Robust with hair of Dr. Phil and body of

guy with tight purple shorts that snaps whip. He is about 45 years of

per Thrusting arms out during Crazy Black Man's YAAAAAAOOOOOOOOOWWWWWWWWWLLLLLLl

As if clouds have parted and troubles of world cease to hault, and starving etheopians

can even forget about their hunger and rejoice in Old Man

He is 2nd coolest guy in universe after Jack Black

The other thing that one must know before viewing this altimely god movie, is that Judas shoots fire out of his mouth. 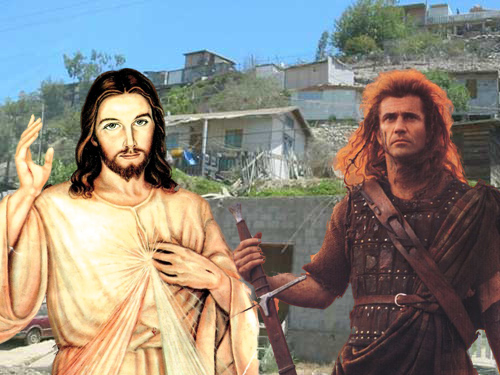 This photograph of Christ (left) and Gibson was taken by a paparazzi during their stay in Tijuana. Both appear highly intoxicated.

Gibson wrote all of the music for the play in less than three weeks. It took Christ more than two months to write lyrics, which began to frustrate Mel. When Gibson saw the plot, he thought of it as an overy pompous representation of hubris, and told Jesus that if He didn't change it, he would leave the project. He loved Christ, but not that much.

Gibson fulfilled his promise, quitting the project. In a fit of rage, he drafted his hit movie The Passion of the Christ as an attack against his ex-partner. As opposed to the flattering play he and Jesus co-wrote, The Passion pretty much showed Christ getting His ass kicked up and down the block for two straight hours.

Jesus Christ Superstar was a huge critical success, but the general public was unable to appreciate the work. The failure of the play started a chain of events, Jesus spent the rest of his life in bitter desperation, struggling with substance abuse, an addiction to pornography, and backstabbing Jews trying to nail him to a 2x4.

It was really John Lennon's boisterous comments that did him in though, when the Romans came to get him, his heart just wasn't in it.

In August 1982, Jerry Seinfeld made a remake of this movie, starring him as Jesus. Many thought it quite odd because Jerry Jew? Still, in a lovely fusical, he fused this movie with "Fiddler on the Roof" somehow. Hence, Jesus Christ Roof. Jerry Jew and yoyt. Jerry was extremely happy with the project, saying that it

"it says there's a fiddler, but there's no fiddler! The title says fiddler, but the fiddler shows up once during the entire film! If i see a movie that says there's going to be a fiddler on a roof, then I wanna see a fiddler on a roof! WHERE'S THE FIDDLER ON THE ROOF?!??! Also, have you ever noticed that Jesus is neither a "Je" nor a "Sus?" It SAYS there's gonna be a "Je" somewhere in the bible, but I don't see any "Je's!" And it says that there's gonna be a "sus" in the bible , but where are the "sus's??" If I pick up a bible and read that the main character's a guy named Jesus, then I wanna see some "Je's" and "suKkrRAAAAAAAAAMMMERRRR~~!!! WHAATTARE YOU DOOINNN KRRAAAMMMERRR!! THAT'S MYY TOOAAST KRAMMMERRRRRRRRR!! You can't just go takin' people's toast left and right, up and down, back and forth, it's the TOAST that's in the toaster, not the KRAAAAAAAAMMMERRRRRRRR!!! WHAAATTARRE YOOUU DOOIINNNNNNN!!!!! KRRAMMMERRRRR STTOOP TOUCHING MY LAMP, KRAMERRR!! WHY ARE YOU TOUCHING MY LAAMMP!!!?!?!? WHYY ARE YOU TKRAAAAAAAAAMMMEEEEEEEEEEEERRRR!!! KKRRAAAAAAAAAAAAAAAAAAAAAAAAAAMMMMMMMMMMedium crab bis - Que.