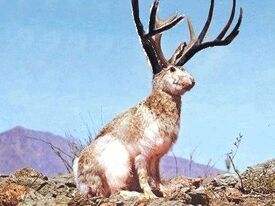 "Our experts tell us that this image of a female Jerkalope with 2 pairs of antlers was definitely not photoshopped.

The Jerkalope is a ferocious rodent-ungulate that inhabits the vast plains of North America.

While little is known about Jerkalopes, we have managed to obtain the following information from a credible source, and from Lobster Jesus.

The wild Jerkalope is the most dangerous creature inhabiting the American Midwest. Jerkalopes are so dangerous that only one person has ever survived an encounter with one. Jerkalopes attack on sight. Unfortunately, their eyesight is extremely good, and they will see you

Jerkalopes mate only on the 31st of June. They females attract males by leaving trails of Magnetic Monopoles throughout their territories. The males track down the females and begin the mating ritual. The Jerkalope mating ritual consists of the male doing the Macarena while presenting the female with a gift of dead babies, radioactive isotopes, and Myrrh. 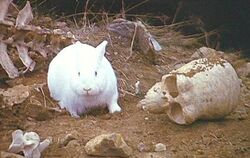 Watch out, he'll kill you in one scratch

This 2-month old Jerkalope appeared in the movie Monty Python and the Holy Grail. Despite the warnings of the wizard Tim, King Arthur orders one of his knights, Bors, to slay the rabbit. Bors approaches it, sword drawn, and is immediately decapitated by the rabbit to the sound of a can opener. The knights attack in force, but are driven into retreat as the rabbit leaps from knight to knight, tearing out their throats. The Rabbit of Caerbannog was slain with the Holy Hand Grenade of Antioch.

All of the attacks in the first hour and a half of jaws were actually Jerkalope attacks. Then people blamed that poor shark, which was so depressed in considered suicide.

In the scene where Sauron is beating the crap out of the armies of elves and men, flinging them around with ragdoll physics, in actuality, Christian Scientists were being herded to a Jerkalope. The armor and weapons were added with a computer.

Jerkalope is a term made famous on the OG by Dead Again. While Mr. Again was not the originator of the term, his use of the word made it what it is today.

Some controversy exists over the ownership and Trademark of the word, although the word falls under the rules of Unprotected Intellectual Property.

The matter is still in the beginning stages of litigation.