HowTo:Instigate change on an internet community website whilst demonstrating your superior intellect to everyone 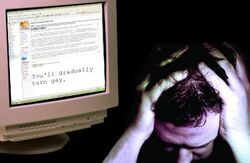 Calm down, calm down...tell us what the problem is and we'll give some thought to a solution...

Take the Fight to "the man"[edit] 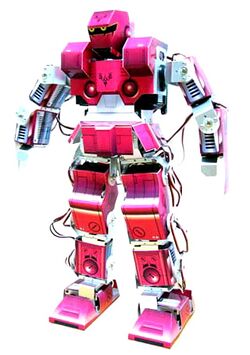 Remember: Website Admins are unfeeling robots intent on nothing less than mankind's total destruction. No amount of abuse and trolling can penetrate their cold, metal hearts.

Comment. Well, I'm really very frustrated by the way I've been treated but am keen to deflect the issue away from my attitude and to a wider sense of injustice which places the blame squarely upon "someone else", what can I do?

Good question......in order to facilitate change you first need to be in a position to be able to force your will on the collective community. Invariably, within the world of the internets, this means attaining "rank" within the community to be able to speak, or better still act, for the people whose opinions you don't really give a flying fuck about and are looking to bend to your will.

Technology surrounding the internet practically gives you the means to get this to work. Internet Anonymity allows you to set up as many sockpuppet accounts as you like, that over a short degree of time, can be "shown" to be responsible, decent contributors and members of the community. Think of these accounts as "sleeper cells" awaiting your chance to strike. Should you be lucky enough to have a group of socially awkward acquaintances that you class as friends, they too may be engaged to expand your secret army of faux minions. Forming a small clique of like-minded but pliable juveniles can also help further your agenda, but be careful not to allow their childish enthusiasm reveal your goals too quickly.

In order to push towards your goals basic rules of supply and demand need to be addressed. Many communities are reluctant to take on new administrators, no doubt due to the evil, faceless cabal of existing administrators who simply refuse to share power or listen to your ongoing rant about how everyone is against you, and it wasn't even your fault in the first place, and I'll show you bastards. Anyhoo, in order to look towards gaining power within the community you must first give the appearance that there is, without doubt, an overwhelming need for more administrators.

Again, the same internet technology gives you this on a plate. The basic job of a site administrator is to keep order, stop vandalisation and trolls, etc. What if.....part of your secret army of anonymous IP editors spent some considerable time engaged in these activities up to the point that you consider that the admins MUST accept the need for "fresh blood" within their cabal? Surely they can only keep up their pretence that "we are dealing with everything" for so long.

The invisibility cloak of anonymity will also allow you to wage justified personal vendettas and guerilla warfare against members of the current administration for the site, hopefully forcing them to accept your rightful place as supreme executive power within the community.

It is important to recognise the point you should stop digging, least you find yourself trapped in a hole with Tony Robinson.

Comment. Sounds both exciting and scary, are there any dangers inherent with this approach?

Associated with youthful vitality and a seemingly unending supply of "I'm fucking right" comes an almost all-encompassing failure to notice one of life's great ironies. In setting out to further your own pre-defined agendas you, quite correctly realise that you must "use the system to beat the system". And so, for example, in order to fight against the injustice meted out from a tiny minority of unqualified individuals who have, for some unjustified reason, been raised to positions of authority, you focus on finding a group of like-minded individuals who will help you collectively to push through your agenda for change. Due to your noble goals you are, of course, able to justify any kind of action to meet these goals. As we know the end justifies the means.

In order to focus your comrades on the task ahead it is important to maintain the required fire in the belly. By perpetuating the belief that your rights and freedom is questioned by an evil cabal you can continue to aim vitriolic attacks at individuals that you propose represent this group. Of course whatever reaction they have to your attacks "proves" your point. A well considered, level headed response is clearly the act of a manipulative Machiavellian. An angry rant indicates that you have the bastards flustered and they are coming out on the attack in a desperate attempt to maintain their stranglehold on the community.

Whether an evil cabal exists or not isn't the issue, the great irony in these matters is that in attempting to bring down a system you view as corrupt you have in effect created your own, a select little clique of individuals with a fixed worldview and agenda to be forced upon the masses. Its for their own good...

Your army prepares for the coming battle...

Comment. OK.....you're talking me into it.....can you give me some further details just so I'm totally clear with the whole idea?

In order to achieve the paradigm shift of consciousness for people to inevitably accept your dominion it must be accepted that the process will take some considerable time. Of course Internet Years are similar to Dog Years in that a few months may be considered to be the equivalent of a year or two. That said don't expect instant change, patience must be key. The last thing you would want to do after your months of hard work is to jump the gun, but at the same time that inner pressure to prove your brilliance is eating away to you. Oh fuck it, these people are all idiots anyway...

Over the preceding months you will have organised your "troops" spreading them out throughout the system. Utilising red herrings such as voting for/against issues is sure to put everyone off your scent, establishing your accounts as valid and useful contributors to the site, therefore increasing their standing within the community. Glossing over the fact that in order to achieve this you have acted in a reasonable, mature manner, its clear the coming big reveal will embarrass those bastards and leave everyone admiring your collective genius. Surely now is the time to act...

A few weeks of building up the belief that change is necessary and its time to put your big guns on the task. During the last few months one or two of your accounts have become more established within the community than others, and everyone knows that on the internet people are perfectly happy to listen to newcomers to any group when they arrive and tell you how to run a website just a few months after they have arrived. Start a few discussions on people's talk pages and a few Forum posts. "Knowing" when an "attack" is immanent you can time your forum postings to perfection, gaining the most timely validation to your arguments. In no time at all a groundswell of popular opinion will be in your favour. 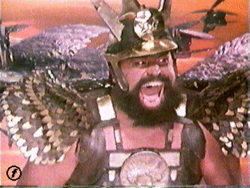 Its probably not that important...

Comment. If you think its worth mentioning, it could be?

Well.....its just that, if we're all only here because we believe in the idea of this place, and that somehow, even with all the different values, viewpoints and the double rainbow of humour types, we mostly manage to work together to create something greater than the sum of its parts....well maybe instead of being a bit of an arsehole trying to force your view on people as the only way things should work here if we were to recognise that we are all just trying to do the best we can, and set aside ridiculous theories of secret groups plotting and planning on one side or the other of a perceived argument that doesn't actually exist in the first place. I don't know...maybe we could just get back to writing funny articles?