Many persons through history have been believed to be the Anti-Christ. The problem is, none of them turned out to be the one! Because of this, this simple guide has been devised to guide you in your search.

Nine out of ten prestigious theologians recommend this article.

Tip One: The Number of the Beast[edit]

"Here is wisdom. He that hath understanding, let him count the number of the beast; for it is the number of a man: and his number is Six hundred and sixty and six." -Revelations 13:18

Look closely at the numbers 666. It is clear that these numbers resemble sperm. Hence, the Anti-Christ will be a sperm donor, because he wants to spawn his seed into the world. Satan has never lived on earth and experienced earthly pleasures. Therefore, he will also impregnate any woman he can lie with, which will be many.

The Anti-Christ will make many signs. They will each contain a picture of the Beast. Many will be held by demonstrators encouraging the practice of bestiality. They will picket Washington, D.C. to call forth confessions of law-makers regarding their relations with animals.

The Anti-Christ will also create many confusing signs on the highway, distracting drivers and leading to many becoming hopelessly lost.

A sample sign which may be used by Anti-Christ supporters.

Sample roadsigns of the Anti-Christ. 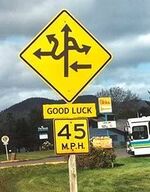 Good luck is wished to all who follow his path.

Tip Three: The Mark of the Beast[edit]

"And he causeth all, the small and the great, and the rich and the poor, and the free and the bond, that there be given them a mark on their right hand, or upon their forehead." Revelations 13:17

The Anti-Christ will hold world-wide carnival attractions. To get in, each person will need to have their right hand stamped with a mark created by permanent ink. Goofy and drunken people will prefer the mark to be stamped on their foreheads.

Performers at the Anti-Christ Carnival.

Tip Four: The Horns of the Beast[edit]

"And I saw a beast coming up out of the sea, having ten horns, and seven heads, and on his horns ten diadems, and upon his heads names of blasphemy." -Revelations 13:2

From this description, you should easily be able to spot the Anti-Christ. The first thing to listen for are the horns-- You can't miss them. You should hear them up and down your street. 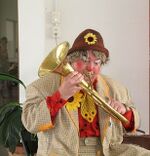 Where will the Anti-Christ hide his seven heads?

If all else fails, choose a political or religious figure you do not like. Review the text of Revelations with care and diligence. Surely you can find basis for your belief somewhere in the vagueness.

Tip six: The Words of the Beast[edit]

The beast will say stuff about pie.

Some believe the "Auntie Christ" will precede the "Uncle Christ." These people are convinced a matronly woman will assume the Heavenly Throne. Perhaps our eyes should be cast in this direction.

Could this be the Auntie-Christ?

Thank you for joining us in our Bible Study for today.