HowTo:Get Out of a Paper Bag

Fellow Americans, have you ever been trapped in a paper bag? Probably not, because if you have, you're already dead, due to lack of oxygen. Or carbon monoxide (depending on what part of the country you're from). Maybe you've survived due to the luck of somebody by your side, or perhaps your good ol' faithful dog. If so, this easy guide will take you through the steps on how to not ever get stuck in a paper bag, and if caught in a paper bag, the proper way to escape. This will prevent the death of young children and bisexual Frenchmen alike. 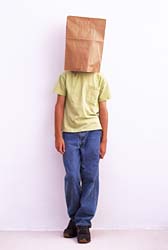 In 1981, a French man, well known as Jon Lovitz was telling a joke to his friend and colleague Seth Rogan involving removing elephants from a Safeway bag. The punchline was revealed that of taking the "S" out of "Safe" and the "F" out of way. Seth Rogan got very confused and blurted out "There's no 'f' in 'way'," and Jon Lovitz laughed to his hearts content. Seth ran off angrily, tripped over a banana peel, and ironically landed in a Safeway bag. Because Lovitz was laughing so hard, he was not paying attention to the nearby suffocating Seth Rogan. Combined with the lack of oxygen and previous hits of nitrous oxide and cannabis, Rogan died at the early age of 12. The tragic story of Seth Rogan echoed with immense pain over the countryside of France and the neighboring country of Mexico that it became a popular suicidal trend to put paper bags over the head to kill one's self.

Holes are optional, but more of a quick fix. You'll still die... eventually.

This guide helps those with a paper bag stuck over their heads escape to freedom, and free themselves of suffocation, claustrophobia, incontinence and death from said paper bag.

Breathe (Keep in mind some people will forget how to breathe after being stuck in a paper bag for more than forty minutes at a time, so this last step is a crucial one.)

With these steps in mind, almost anybody (except retards and crackwhores) can get out of a paper bag, and YOU CAN DO IT TOO. Probably also a good idea to burn or urinate on paper bag.

The Bush Administration regulated fully that the two-step program would be required by law to be printed on the back of each paper bag at grocery stores in the US and elsewhere to avoid certain death in 2003. Since then, paper bag-related deaths have gone down on a sharp decline. However, the money spent to study this phenomenon exceeded $25.2M in taxpayers salaries. Southeastern Asians praised this law when it went into effect.

Mostly involves living, breathing, and not suffocating. People who navigate their way out of a paper bag can live to any age... that of being two minutes old, to practically one-hundred. Of course, the "Forced Paper Bag" way of killing somebody has been around, mainly a scare tactic used by the Northern Alaska Nazi Demonstration Organization (NANDO). (Curb jobs haven't been invented yet up there because there are no curbs. Just dirt roads).

Hope to whatever deity you worship to save your ass. Or just hope you're in the same room as somebody else who isn't laughing at your own self-demise due to lack of intelligence.