One, the most important number of all. Some may say the loneliest number, but others counter that two can be as bad as one and is in fact the loneliest number since the number one. However, lonely or not, the number one has proved to actually be incredibly hard to count to, maybe even impossible. While it is the first number so all that must be done is say it,[1] there is still an intense amount of difficulty in attempting to count to one. 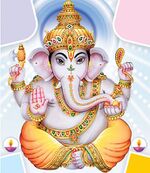 Preparation is vital when undertaking such a rigorous activity as counting to one. We don't need any of that training montage shit, although it would be nice. I personally enjoy drinking a nice mug of hot chocolate before tempting death in such a way as counting to one. Ya know, whipped cream on top. But not that cheap crap, the good stuff. The kind of stuff that costs at least three fifty a pop. Little chocolate flakes on top, served up in

my favorite mug. Just like mother used to make... Mmmm... So warm it's almost like I'm wrapped in a fuzzy blanket... Total bliss... *Ahem* Anyway, it's a nice touch.

Another thing that you might want to do is meditate. Now, I know what you might be thinking, "Meditate? Are you kidding me? Only hippies meditate! What're you going to tell me to do next? Smoke pot?" But hear me out! It's not only hippies who meditate, it's also yogis. Now, I know this may not sound like a reason to meditate, I mean, according to wikipedia

they're nazis. Not to mention all those times they were caught stealing picnic baskets. But that's not all they do, they also have been known to be named the Most Valuable Player of the American League three times, so they're not all bad. Just think about it, they would've had to count to at least one in order to count their three instances of being named Most Valuable Player of the American League. And that's what we're looking for!

Step two: Accept that you're probably going to die.[edit]

Five seconds earlier: "I think today is a fine day to count to one..."

The sad truth of the matter is that two out of every three people who attempt to count to one will die. Or maybe it's not that sad, that is if you're an arsehole. But that's beside the point. You may want to say farewell to your friends and family. If there is anything you need to get off your chest, start getting. You probably won't die, but on the off chance that you do, just get what you need to get done. Maybe turn off your sprinklers or stove, take out a life insurance policy, lose your virginity. Make sure you do that last one if you already haven't; it's loads of fun.

Taking the more religious side, however, pray. Not that is matters; you'll probably end up going to hell anyway. Why, you ask? Well think about it, counting to one will almost definitely kill you. So by choosing to do so, it's almost as if you are shooting yourself in the head. And isn't killing yourself one of the ten things that's highly frowned upon by God, or something? I don't know, I've never read the bible myself. I would, but I can't read...

Okay, now it's time for the moment you've all been waiting for: The dangerous part. At this point one of two things will happen to most people, they'll either piss themselves and call it a day, or piss themselves and start counting. There just seems to be something about counting to one that causes people to lose control of their bladder.

At any rate, the time has come to commence counting. Now get back here! No running off now, you're way too far in to turn back. It won't be that bad, I promise! If you make it, think how happy you'll be! And if you don't, I'll bet it'll be fast and relatively painless. But seriously, just in case you fail, allow me to refer you to this article. You'll need it.

Hey, I'll even help you out! I'll count down to zero from five, and when I get there, just go for it! Ready? No? Too bad. Here we go: