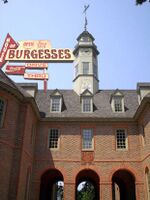 The World Famous House of Burgesses.

Since the founding of Jamestown in the Commonwealth of Virginia, the people of America have sought an inexpensive option for delicious food served quickly. With this in mind, it didn't take long for America's First Fast Food Restaurant, The House of Burgesses, to come into being.

The restaurant's specialty item was the "Burger", or "Ham Burger", as it was made using a patty of ground ham between two buns, as ham was plentiful. However, in 1654, cattle were introduced to the Colonies. The House of Burgesses mistakenly received a shipment of beef instead of ham. With a restaurant full of patrons hungry for a Burger, the decision was made to go ahead and grind the beef and make the Ham Burgers with that. The new sandwich was an instant success. However, the name stuck, and to this day, a Hamburger is made with beef. 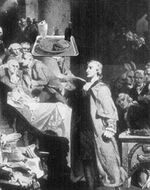 Patrick Henry, serving up the Famous Burger at the House of Burgesses.

Many famous Americans had their first work experiences at the House of Burgesses. Before becoming a General, and then President, George Washington was a fry cook at the House. Patrick Henry worked the register, and was a server for many years before making his famous "Give me Delivery or Give me Death!" speech. In fact, he got his inspiration from his experience at the register when a patron said to him, "If I can't get this 'to go', I'm just gonna die. I swear to God I will." This simple exchange led to one of the most patriotic speeches in American convenience.

Now, the House of Burgesses continues to serve its famous Burgers, and a wide range of other items. A sample of the menu is listed below: