Hitler and the Jews 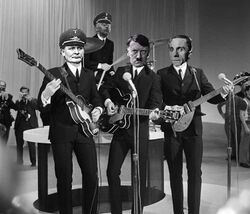 Hitler and the Jews, a famous rock group in the 30's singing their breakthrough hit, "I want to hold your land." Adolf Hitler on Lead Guitar and vocals, Joseph Goebbels on guitar and backing vocals, Hermann Goering on Bass guitar and Heinrich Himmler on drums

Though Hitler may be remembered as a genocidal fascist and the creator of the Nazi party, those closest to him will always remember him for his vocal stylings and persuasive stage presence as the front man of '"Hitler and the Jews"'. Hitler and the Jews became a hit 2 years before the Borchstkreig with the album The final soultion, featuring the hit singles The Skull Measurment of my Love, You have to fight for right to mistake of 1936 when the band's agent got the a gig doing a gig at a Bar mitzvah after nearly being mobbed, Hitler exposed himself on stage and nobody noticed. Enraged and humiliated, the nascent Fuhrur vowed his revenge, and the rest, as they say, is history saying famously "well if the rabbi hadnt been wearing that hat".

Hitler would later become one of the Beatles after Hitler and the Jews broke up. 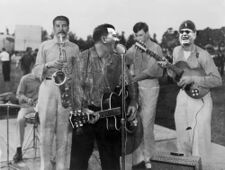 The Ingolsdadt debacle was a turning point for the band, as Hitler spent more and more time in Berlin prison for trying to overthrow the government by running at the Reichstag screaming "Blame the Jews and/or the communists!", only to be arrested again. His bandmates became increasingly distrustful of him. Their third album, Reichstag Bop yielded three hit singles, Born Better than You, Anchluss, this Poland, and the universally despised Mein Kopf, Yourn Kamp. Panned by critics as needlessy homophobic, antisemetic and being obssesed with prediction of the birth of Hulk Hogan, hailing him as an "Aryan" supreme being, rejected by the fans, Adolf could take no more, and had the other three members of the band (who remain nameless to this day) sent to the German version of Butlin's, Auschwitz. After this, Hitler famously ordered the Red Sqauron to destroy the Death Star that was at this moment being constructed by the British Empire , sparking World War II a New Hope. Adolf and the Hitlers faded into obscurity after this. Dan Murphy is a distinguihed member of "The Hitlers", having recently rejoined the band after a brief tour with New Found Glory. He decided he was done "gaying it up" with "these posers" and rejoined the Hitlers. Other band members were reluctant at first, but they get no say, as they are dead. 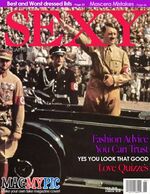 Hitler on the Cover of Sexy Magazine

Hitler and the Jews may be a forgotten band, but their influence is still felt throughout the world, albeit in areas other than music. For instance, their love ballad Achtung led almost entirely to Stan Lee's creation of Spiderman, based on one quote, "my nazi sense is tingling, which could sense liberalism and minorities I shot webs across the ceiling" in which Adolf claimed to To having unt warm feeling in mein special placeover a young Austrian maiden, Eva Braun. However, an article the music magazine NZI later revealed hit on the fact he was making reference to how he used to see a young Austrian lad collect wood for parnet and how he longed to..."play" with the lad. This lad was later to become one of the SS, an Adolf and the Hitlers tribute band, the boy's name being Arnold Schwarzenegger.