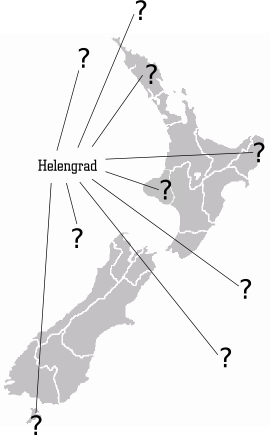 Helengrad on a map of New Zealand

Helengrad is a large and sprawling but secretive military-industrial prison, which is in the southern realms of the Specific Ocean. The precise geographical location, population, and available internet connectivity of Helengrad are mostly unknown, as the national government brutally enforces a policy of secrecy over its military assets.

However, this has often aroused public curiosity, inspiring several attempts to seek and infiltrate Helengrad. On occasion, these attempts have revealed photographic glimpses of the town but little else, as the perpetrators usually disappear under mysterious circumstances. Due to the predictability of the disappearances, heated debate has raged in the public conscience - especially through the underground free press - over whether the use of the adjective mysterious is at all redundant in describing them.

The chief justification provided by the government for the secrecy is that New Zealand, being an aggressive military presence in the region, relies heavily on the production and research of armaments in Helengrad. Should this be compromised, it is difficult to imagine what the consequences will be. Indeed, the task is so daunting that even Prime Minister Helen Clark has repeatedly admitted to having never considered them. (He had subsequently promised to establish another ministry to govern all intellectual considerations thereof.)

The most notable attempt at exposing Helengrad was carried out by one Peter Stonwin, in 2005, following the public unrest of the Brash Insurgency. Although little was published about his findings, several photographs taken from within Helengrad were leaked, shown here.

This scandal, dubbed 'Helengate' cast light on what was originally believed to be little more than a new housing district in more than 5 rural areas. It is believed that one of these is the true location of Helengrad, although nothing further can be discerned.

BREAKING NEWS: Helengrad is believed to be the origin of the "Paul is dead" hoax, however this has been disputed by Kofi Annan who, in his last act before heading off to organise 'Kofi's Rocking New Years Eve', stating 'Shit cock poo tits', shocking the Beatles community.

Although no official information is provided, it is generally accepted that the economy of Helengrad is dominated by private arms producers such as Telecom NZ, Air New Zealand, and Weta Digital, who have manufacturing and testing facilities in the region.

Other theories assert that many foreign military contractors operate in Helengrad, including Starbucks, Amazon.com, and the entire nation of Canadia. Further evidential speculation suggests that if foreign workers are being secretly imported to Helengrad, it may serve to explain the rising national demand for noodles and burrito wraps in the last decade.

Helengrad is a central issue in the democratic politics of New Zealand. It is therefore very rarely spoken of, save for the following in a speech by Don Brash in early 2005:

'Tis not worthy, good sirs, that I, alone on my mound, doth observe yonder fortress and ponder: Funds therein used are now, of course, gone. But then, dear people, doth our taxes tax us so?

Helenanamo Bay no one has ever been seen again, so no information is provided.

This Article is Not a Protest Against Abortion[edit]

Just wanted to get that cleared up.