For those without comedic tastes, the so-called experts at Wikipedia have an article about Golliwogg. 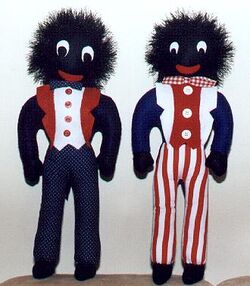 Golliwogs in their natural habitat.

The "Golliwogg" (later "Golliwog", "golly doll") were a race of diminutive dark-skinned gnome-like creatures who once ruled the sprawling steppes of Afro-America. They are thought to have died out during the last Great War for the Moon (1812-1990) due to the resulting shortages of Jazz Music.

The Golliwogs were once a very proud and intellectual society, credited with many great discoveries including Chinese Food and the Phonograph.

They built their cities out of reinforced Aluminium Cronkite, mined from the mountains, and twigs. This made their buildings quite resistant to intruding native creatures, such as the hideously dangerous and dangerously hideous Uglo-Americans.

The largest city in the Golliwog Empire was named Itali (not to be confused with Italy). It was the home of many Golliwog monuments.

The Golliwogs had few natural predators and the only one they were not able to sufficiently manage was the Flying Shark. Attempts to build shark netting failed to save them, due to the ability of these sharks to simply fly over the nets.

Golliwogs were brought to Earth by aliens to combat the ever increasing dangers of Americans some time in the late 14th Century. They were meant to protect the world from the dangers of McDonalds and other American evils.

Evidently they had little success.

Given incredible minds and a German-like work ethic, they developed so quickly that they had invented the Laser within two and a half minutes of reaching the Bronze Age. This laser helped them to construct brass instruments such as Saxamophones with which they produced their food.

Because of some territorial disputes, they fought and defeated the Native Americans on the slopes of Mount Doom in 1612 (Shire Reckoning), the anniversary of which is celebrated on Thanksgiving and to a lesser extent on Kwanzaa.

Unfortunately, they died out due to a Jazz Music famine.