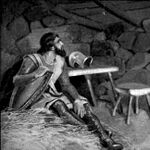 Bruce gets a really funny idea

The Scottish district of Giggles was founded in 1311 by Robert the Bruce. Unlike many of the founding fathers of other geographic locations, he was on the run at the time for having broken Scottish Highlander law. As would be expected, this makes the location of this region rather difficult to pinpoint.

There is much debate, even to this day, about what Robert the Bruce's crime actually was. The crime occurred during a battle with his arch-enemy, which understandably had few witnesses. The body was found on holy ground. The holes were later found to have been caused by moles in the pay of the Redcoats. Logical inference prevailed, and Accusations followed Bob the Bruce. He denied everything, and whent into hiding. Years later, the truth emerged that Bob Bruce's servant actually committed the sin. The general populous ignored this new revelation, saying, "He ran away and got his servant to do it, but that's the same deal, right?"

Taking refuge in a small cave, he sulked for many hours until he noticed a small spider climbing across the ceiling. The spider fell trying to cross a particularly difficult section, but rather than give up, it returned to its task again and again. Finally, after what seemed like days of trying, it managed to cross the roof, whereupon Bruce stamped on it.

Bruce's rucus with the spider was amplified byh the acoustics of the cave. In no time, he had drawn attention from the locals. The men, off on the hunt elsewhere, noticed nothing. However, the young ladies left behind became curious and investigated. Their first meeting is best immortalized in the pop-culture hit "The Drunken Scottsman."

Time allowed Bruce to grow a large fan-base amongst the girls. He developed a firm bond with each girl. These relationships were very stimulationg. It so aroused the Bruce that he felt thoroughly invigorated and pledged to return to his appointed task of war against England, and he did so by creating a Facebook group named "ZOMG I HATEZ TEH ENGLISHORZ!!!!111!!!!". It gained over twenty million members (mostly from the as-yet undiscovered United States and India), at which point the English capitulated and deleted their Facebook account (after the great battle of Flame-Warr valley). It is said that even as he basked in victory that day, he was still giggling at the thought of the plucky little spider being squashed just as it thought it had succeeded. Bruce is said to have reflected in his later years that the moral of the tale was "Don't get ideas above yourself or the King will stamp on your head," and this motif has characterised most Scottish thought in the years since.

With Bruce away, the girls became worried. Deeply they slept with him whilst he was there, but his absence made them grow curious as to his fate. With new desires never felt while he was there, they began to experiement to try to draw their beloved Bruce back. Wanderers and vagabonds found themselves drawn to the cave, and the girls saw a business opportunity. They began to charge tourists to explore the crevace.

Among the vagabonds to come was Bruce himself. Once he experienced firsthand the intense new intersts of the girls, he couldn't bring himself to leave. Bruce decided to pick up the cave and carry it with him on his journeys.