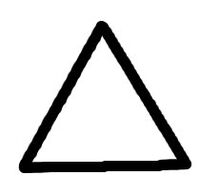 Hegelian dialectics. As can clearly be seen, the pointy end is upward, meaning 'everything's gonna be alright'. Downward-pointing dialectics (aka Negative Dialectics) are associated with witchcraft, Satanism and Adorno. 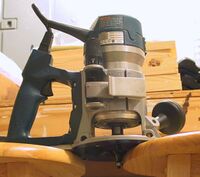 Not a pretty sight: an early hegel router. The transcendental unity of immediacy and mediation is established by a weak diesel generator, which is prone to malfunction. Newer versions rely on alternative sources of energy.

A Hegel (US: Dremel) is a German mechanical tool, such as a Dübel, Hebel, Kegel, Bagel or Schlegel. All of these tools were inventions of Georg Hegel, the German philosopher. Hegel developed a prototype in the year 1806 on his patented Death Bed. But it was not until the arrival of the clever telemarketing strategy of his illegitimate son and snake-oil salesman Karl Marx that hegels found their way into your standard Yankee household.

As a hegel thus has no immediate being, its practical usefulness, for example in repairing simple household devices, is effectively nil. Still, hegels are a lot more popular than your general Heidegger (a mixture between a screwdriver, a hammer and a ferret), for Heideggers are rather badly daseined.

Normally, a hegel comes into action after all other tools have failed. Take a broken VCR, for example. First, you curse. Then, you accidentally cut several vitally important cables with a jigsaw. You open it up with a screwdriver, spit into it, then you probe it with a Heidegger. After that, more jigsaw fun, which is, of course, absolutely pointless. Nothing seems to work.

But then, you've still got your good ol' hegel! By applying a hegel to your VCR, you realize that the illusory wholeness of the broken VCR is, in regard to its essence, itself founded in the determinateness of being. Its Essence has an illusory being because it is determinate within itself and thereby distinguished from its absolute unity. But equally this determinateness is absolutely sublated in its own self. For essence is the self-subsistent, which is as self-mediated through its negation, which negation essence itself is; it is therefore the identical unity of absolute negativity and immediacy. 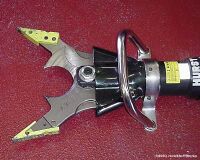 With a Hegel spreader like this, you can inflict an awful amount of damage to people and things alike.

The negativity is negativity per se; it is its relation to itself and is thus in itself immediacy; but it is negative self-relation, a negating that is a repelling of itself, and the intrinsic immediacy is thus negative or determinate in regard to it. But this determinateness is itself absolute negativity, and this determining which is, as determining, immediately the sublating of itself, is a return-into-self - and voilà, your VCR is a whole again, by determining itself as a self-reflectory movement of this return-into-self, which, ideally, is just the VCR, but whole again.

Not surprisingly, a hegel can also be used to destroy all things. You just have to use it upside-down ("vom Kopf auf die Füße stellen", Karl Marx).

For those without comedic tastes, the so-called experts at Wikipedia have an article about Hegel.