“Gothenburg is the natural place to start penetrating Sweden”

Founded by Napoleon in 1649, the city of Göteborg (Gothenburg) rapidly grew to become Sweden's biggest seaport. Today the city has more than 4 million inhabitants and is the engine of the Swedish economy. Large corporations such as Volvo Trucks, Volvo Buses, Volvo Construction Equipment, Volvo Penta, Volvo Aero, Volvo Financial Services, Volvo PV, Volvo machines and Volvo Total were founded there. Outside Gothenburg lies a famous christian pilgrimage site, as Volvo Jesus was born and raised in village Säve.

A brief history of the city[edit]

Sports and other culture[edit]

Göteborg is also the Swedish centre of culture, featuring such famous painters as Johnny Modem and Gunnar Svedenborg. The biggest park is the "Castlewood" and the famous theme park is called "Stena Line".

The most important soccer teams are ICA Göteborg - the people's choice, usually called "the bananas in the pyjamas", BAIS - the alcoholics' and motorcycle club's team, and Hyrgryte (also called Leasarna's Lag) - which has no supporters whatsoever.

The hockey team is "Frölunda Indians", a name that honors a 4000 year history of Aztek- and Naori-indians living in the surroundings of Göteborg. A team that engineered Daniel Alfredsson, the NHL CENTER DEFENCE MACHINE.

A sport peculiar to Gothenburg is 'mackerel flinging' in which Swedes born within 5 miles of the Gothia Towers hotel are allowed to throw live mackerels from the 23rd floor of the hotel on to the streets below. Points are awarded for hitting anyone over 65, Norwegians, Danes, or relatives of Ulrika Jonsson.

Gothenburg is also the origin of many melodic pop metal bands such as Korn In Flames, At the Gates, and Dark Tranquillity; in which the first two are played by pedophiles in order to get them pumped to rape little boys. Emo bands such as Atreyu copy off of these bands so much that they rub their emoness onto them, making Swedish music acts hated by tr00 death metal fans (even if they are tr00). Therefore, if you like melodic pop from Gothenburg, you are entitled to come out of the closet, get nutured, or get sentenced to life in Gothenburg.

In Gothenburg, you can piss anywhere you like. The moat canal is especially suitable, since it was once dug for this purpuse. Other recommended places are the Poseidon statue, the gates and yards of Andra Långgatan and right outside the Central Station, since it costs money to piss inside.

Even ladies can piss wherever they like. It is just to lift up the skirt and have a go. This normally creates a merry cheerful mentality amongst the local bachelors, hobos and other un-weds called the Gothenburg spirit.

The largest urinal in northern Europe is located in Gothenburg. It is located underneath the mall Nordstan, and is named Urinröret (The Urine Tube aka Uretha). It has an impressive capacity of 240 urinists. This is also where almost all accordation-players in Sweden live.

Another famous citizen of Göteborg is Brüce Waÿne, better known as the Swedish Batman when he roams the city at night in his ünderwear, fighting crime and making a nüisance of himself.

Göteborg is also famous for its many intellectuals, the most famous one being Karl "Charl" Hedlund. Karl's many brilliant and famous ideas have revolutionized the field of computer engineering, bringing such terms as "drunk programming" (fylleprogrammering) and many others. Karl has also begun many great IT-projects, to date, none are reported as finished. Karl is not only a famous intellectual, he is also one of Göteborgs most promising athletes, in most local sporsts such as: playing various computer games without taking a break longer than 15 minutes, whining as a sport and also in power lifting. Rumour has it that Karl has benched well over 1000 pounds while wearing nothing but a butt plug.

Hisingen is a mountain north of Göteborg where there are only industries, Volvo, neonazis and drug dealers.

Majorna is a picturesque, yet filthy part of town where people fika all day while being over pretentious and gay.

Masthugget is a famous fortress situated upon a mountain overlooking the filthy Majorna. From the high towers of fortress Masthugget you can watch the stupid Majorna-people fika all day long.

Vasastan is where corporate leaders keep an extra apartment to throw parties in and cheat on their suburban husbands.

The port of Gothenburg is a stunning crystal city carved out of frozen urine. It is a rich and cosmopolitan metropolis and is populated by diasporas of gnomes, penguins, seals, moose, Ice trolls, Valkaries, and frost giants. The great city's mindblowing skyscrapers and great palaces of cutting edge architecture are renowned all over the planet. The best example of these buildings is Läppstiftet - the Lipstick. It can be seen from every part of the city, even all the way from the island of Liftnone, over the Gothic River, and is situated next to the Gothic-Elven Bridge.

The Lipstick, next to the battleship that has been trapped between two bridges for eight centuries and can't come out. 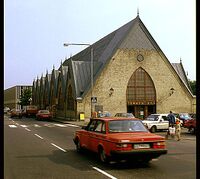 The Human community of Gothenburg of are infamous all over the globe as drooling lust-crazed nymphomaniacs and for making their dogs wear tiny little golf outfits. Though they are also revered for their photographic memories and their ability to speak a multitude of languages with terrifying fluency. (Legend has it that the population of Gothenburg are the direct descendents of the peoples of the Biblical city of Babel.)

The most prevalent religious organisation is the efiskcopalian church. The efiskcopalian's holy site is the 'Fish Church', a place where Swedes congregate worship the deities of the sea and take part in blasphemous rituals using the catch of the day for holy sacraments.

In Göteborg, everybody has the name Glenn, both women, men and dogs. The only person from Gothenburg who is not called Glenn is Leif Pagrotsky, who is so small that nobody has ever seen him.

The wise old King of Gothenburg lives in a high tech palace come theme park and Biodome at the centre of the city, called the ‘Universium’. The ‘Universium’ is on the hewn from the side of a man made mountain and is protected by a moat filled with vicious Sharks and starved leopard seals, the children of the city are allowed to visit this hallowed place once a year on Christmas Eve.

Gothenburg has strange and punitive drinking laws, all alcoholic beverages sold within the city limits are subject to a hefty morality tax tripling and sometimes quadrupling their cost. Illegal Gin Joints, alehouses, and speakeasies are commonplace. Oddly to obtain a late licence in Gothenburg an establishment must have a croupier and a roulette wheel on site.

Gothenburg is also well known for its outlandish pizza toppings and exquisite sushi.

The excentric Gothenburg billionaire Jonaz of Ace of Base accieved great fame when buying the Golden Gate Bridge and transporting it by raft to Gothenburg. There he had it reconstructed to improve his harbour view, and also had it repainted as a tribute to his favourite toothpaste.

Robert Smith is the unofficial underground king of the darker side of Gothenburg, the capital city of the Goths, which lead the goth crowd of the rest of the world in various cryptic ways. every year the assembly gathers here under the catacombs of the old city and the big old Fortress in the middle of the town called the Skansen Crona.