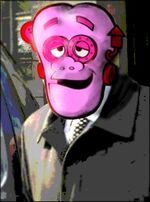 Frankenberry, seen leaving the courtroom after his victory in General Mills vs. Earth.

Frankenberry is one of the oldest and best cereal spokesmen in the food industry, and is known to have been the third victim of the Cereal killer. He was also the first of the Cereal Killer's victims to survive, and since then, he has had a great deal of crap happen to him, in what he jokingly terms his "afterlife." According to his creator and fellow cereal spokesman Count Chocula, he is a megalomaniac, and apparently his head is actually a pair of human butt-cheeks.

Frankenberry was conceived shortly after Count Dracula converted himself into Count Chocula. One day, in a fit of extreme boredom and with nothing to do (as his trusty assistant Ygor was presumed dead), Chocula had an idea. All of his vampire buddies had retired to Ohio, and there were no villagers to terrorize, since they had all moved to the town where Cocoa Puffs was invented. It was his favorite night of the week, Grave Digging Night, so he went on a rampage - digging up graves until virtually all the graves near his favorite hunting ground, Blue River Community College were empty. He then returned to the castle, with a full sack of body parts, ready to build his most ambitious creature yet.

Opening his copy of Creating Monsters from Human Corpses for Dummies, he dived into his task, but soon realized that the only equipment he had available was a potato, an ice cream scoop, and a lawn mower. Nevertheless, the Count managed to set up a complete laboratory, MacGyver-style, only using these items, some toothpaste, an uninflated football, and a lock of kitten hair. But upon resurrecting the dead bodies, he realized he had failed to procure a suitable head. Looking through some of the parts, he found an extra pair of butt-cheeks, and, feeling this was an acceptable substitute, finished the project. Thus, Frankenberry was born. (The term "butt-head" was also born.)

Frankenberry led a successful career as a dictator, though he was overthrown shortly after people in Cerealland discovered that he was secretly embezzling the local strawberry trust fund. Unable to resist the temptation presented by the strawberries, Frankenberry became paranoid, insisting that a "duplicate key to the storage locker did exist," and that he could prove this with "deductive reasoning and diametric logic." On observing this, Chocula began to recognize the signs of oncoming dementia, and was reported to have said, "that fool - he could've had lime, grape, or even creamy nougat, but he chose strawberry! What kind of monster would choose strawberry over lime, grape, or even raspberry?"

Chocula later played a clever trick on Frankenberry, tricking him into letting Chocula paint his fingernails. Unbenownst to Frankenberry, the nail polish was the "indelible" type, and Frankenberry's nails remain painted to this day. No one knows why Chocula did this, other than the obvious fact that Chocula is a complete asshole.

Some months later, Frankenberry, his mental stability pushed to the limit, finally snapped. Attacking Chocula with a sharpened telephone pole, he seriously injured him, was charged with assault with a deadly telephone pole, convicted, and sentenced to 5 years in a Federal Penitentiary. During his prison term, Frankenberry attended counseling sessions with a prison psychiatrist, and was pronounced "cured" on his release in 2004. Later that day he said to reporters about his long time rivalry with Boo Berry, that "I'm going to be the best, even if that means being the only one". Boo Berry was found in his original body later that day, saying that killing him was the only way for him to be a ghost again. He died several hours later for the same reason he died the first time, a shotgun wound to the dick.