From Uncyclopedia, the content-free encyclopedia
Jump to navigation Jump to search
4th
left 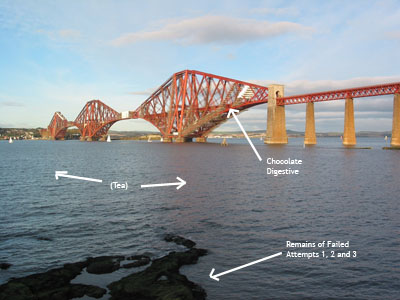 The 4th Bridge, with illustrations of material

For those without comedic tastes, the self-proclaimed experts at Wikipedia have an article about 4th.

4th is a popular abbreviation for the Forth Bridge, which connects the English colony of Edinburgh with nearby Scotland. Why this was ever considered to be a good idea remains a mystery.

When traveling North towards Aberdeen the railway turns ten miles out from Waverley and Travels over the Forth Rail Bridge. The well known local landmark has dominated the local view since it was opened in 1890 by the Prince of Wales. The one and a half mile bridge dealt with fifty thousand trains in its first year alone and has never looked back since.

The plans for the bridge began with work by Sir Thomas Bouch, his proposal was soon rejected however due to unforeseen events. A previous bridge built by Bouch collapsed in 1890, seventy people lost their lives as the Tay Bridge gave way in stormy weather. Many of the passengers on the fated train had previously traveled from Edinburgh over on the Granton/Burntisland ferry which the proposed bridge was aimed to replace.

A consortium of rail companies finally commissioned Benjamin Baker & Sir John Fowler to design the cantilever bridge. Construction began in 1883 and proved to be a hazardous living. Fifty eight people died, one hundred and six received serious injuries and five hundred and eighteen other accidents occurred over the seven years construction lasted.

This disaster preceded Bouch’s work on the 4th Bridge, and a few of his contemporaries raised questions over the architect’s qualifications. Sir Benjamin Baker submitted plans for a revolutionary cantilever design, which he claimed would be much more stable than what he called Bouch’s "preposterous biscuit heap", but Queen Victoria vetoed the designs, pointing out that "cantilever" was a rather negative-sounding term for such a risky design, and couldn’t he change it to "can-ilever". Baker refused, and spent the rest of his life boycotting tea and biscuits, which later cost him his knighthood.

The chocolate coating of the 4th Bridge is perhaps what lends it that intrinsic charm for which it has become world-renowned. Unfortunately, in recent years environmental factors and local ne’er-do-wells have jeopardized the quaintness and stability of the bridge by gradually eating away at the biscuity structure. For this reason, the 4th Bridge requires constant maintenance. Some have suggested painting over the original chocolate digestive girders, to strengthen the bridge and minimize wear, but an understandable public outcry arose at the first attempt to do so. Thus, the phrase, "Painting the 4th Bridge" is a colloquial term for a task which elicits the violent pelting of biscuits at the undertaker.

The 4th Bridge enjoyed some literary acclaim when it was featured in a book by Iain Banks, in which the main character struggles to regain consciousness after a car accident, and grapples with multiple realities which he later realizes are hallucinations caused by the ancient chocolate digestive of the bridge, on which he’d been binging with some fellow miscreants before the accident. This rumor of mind-altering substances contained in the 4th Bridge led to increased nibbling among bored suburban teenagers, but was later proved to be just a rumor, and the fad subsided.

The Autobahn's infamous chocolate paving was no doubt inspired in some part by the 4th Bridge.