“It has a big green wall”

Fenway Park is the oldest, smallest, least comfortable, and most expensive park in Major League Baseball. Yet fans and tourists from around the world flock en masse to this cesspit of sweat and urine because it's all historical or something. Due to the stadium's small size there is no such thing as a bad seat because no matter what you're sitting behind one of the stadium's copious columns but can always see the New York Yankees pumping steroids and underage girls in their dugout. Unfortunately for the Boston Red Sox, the New York Yankees beat them in every encounter. This is because the Red Sox seem to choke all of the time, during games and even on food. In 2006, Kevin Youkilis accidently choked on a california roll and was hospitalized for the whole season while the Yankees won the American League East. 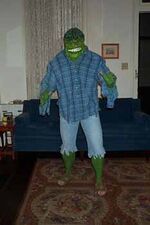 The best thing about the park is that you can see a big Shitgo sign. This sign is very famous for obvious reasons. Sam Horn is the only man to successfully hit the Shitgo sign with a towering home run, causing thousands of dangerous shards of mercury-coated neon tubing to fall to the street below and releasing deadly clouds of highly toxic neon gas. Several Yankees fans standing below were immediately killed. Sam Horn immediately had his number retired for this reason.

The second greatest thing about Fenway Park is the famous Green Monster (not to be confused with the Incredible Hulk). Starting out as just a puny insignificant plywood partition in 1903, it was accidently doused with a vial of growth serum and has since expanded to gargantuan proportions and now threatens to engulf all of Greater Boston and rob many potential home runs from the visiting teams.

As of 2005, the Green Monster is reportedly having a secret love affair with the big Citgo sign. The Green Monster was then featured on the television program Cheaters, where he had to explain to his true love Coke Bottle Statue, why he was caught with the Citgo sign.