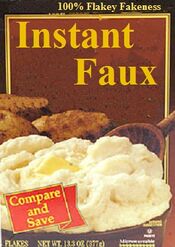 "All your fauxtatos are belong to us!"

- Samuel Jackson as Lt. Flop in the upcoming thriller, Fauxtatos on a Plane

Fauxtatos owe their existence to their one and only maker and creator, Swedish Chef, who at the time held the position of mad scientist at Procter and Gamble. Challenged to find a substrate base for his other popular discovery, gut wrenching Olestra, the Swedish chef happened to discover the Fauxtato. Within days of discovery, it became the most popular food in the employee cafeteria. Disaster struck when half the sales-force succumbed to Fauxtato habits that required years of chemical dependency treatment. Procter and Gamble was left with no other choice but to dismiss Swedish Chef. Fauxtatos were introduced to America’s consuming masses on the hardend streets of Detroit, and a national fauxtato epidemic ensued.

Distraught and loaded with four Nerf ball blasters and a squirt gun, Swedish Chef went “postal” (Swedish Style) on his teammates, launching a one-puppet offensive. Ironically, on his way out of the building he made it just past the loading dock before he was tragically crushed by an outgoing shipment of Fauxtatos. 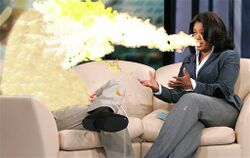 Unfortunately, despite Fauxtatos growing popularity among America’s consuming masses, Fauxtatos do have their detractors. Most notably, Oprah, who has single-handedly orchestrated the Great Fauxtato Persecution. By successfully infiltrating the Miss Teen Idaho pageant, Oprah and her cronies convinced the Idaho State legislative session to outlaw Fauxtatos. The great Fauxtato migration of 1969 ensued, leading to the formation of the breakaway republic of U*Da*Ho*Dis*Stan. Its great leader, the head Fauxtato Imda*Pimp, was recently flamed (both literally and figuratively) on live TV by Oprah with allegations of publishing a popular, but now believed to be mostly fake memoir titled, “a million little white fluffy flakes: Just Add Water.” Despite being banned in Idaho, the book continues to be a best seller, as Fauxtatos popularity among America’s consuming class continues upward. Public opinion polls show that Oprah should stop attacking the Fauxtato community and just mind her own damn business. Her continued antics have disqualified all Miss Teen Idaho contestants to compete at the national level because of steroid use.

Fauxtatos have played a pivitol role in American politics. Aside from being a key reason for abolishing slavery (why pick potatoes when you can make instant fauxtatos?), ending segregation (all fauxtatos are off-whiteish) and being the key determinant in the decision Roe Vs. Wade (when is a fetus a Faustato?). Fauxtatos are well estblished in the inner-circles of the beltway. The Fauxtato party is well known as the 'third-rail' of politics. Contrary to popular belief, more than one presidency has been lost due to the inability to spell ‘Fauxtato’ in a nationally televised debate. While the most common misspelling is the omission of its signature ‘x’, at least one vice presidential candidate placed an ‘e’ at the end, stirring debate in 4th grade classrooms nationwide.

There are many examples of Fauxtatos integration into American pop culture (popularity in Europe and Asia is only just beginning). Fauxtatos are featured prominently in many TV sitcoms and product placement in movies has been on an upward trend.

Fauxtatos on an Airplane (FOAP): This upcoming release is yet another rewrite to the much anticipated Snakes on an Airplane (SOAP) movie due to be released in summer 2006. Due to an overwhelming protest by PETA and numerous further budget cuts, the directors of SOAP realized that it would just not be feasible to release a movie portraying the mistreatment of animals, whether real or not. The director, David R. Ellis, turned to the Fauxtato DisInformation Society (FDIS) for help in rewriting the screenplay. The result, a masterpiece, features fauxtatos in great quantities.

Plot: Starring Samuel Jackson as Lieutenant Nelville Flop on board a flight over the Pacific escorting a mafia kingpin, the Lieutenant is served helping upon helping of protein-less fauxtatos, which for some mysterious reason he can’t stop eating. As his energy begins to fade, he hallucinates fauxtatos oozing out of the overhead bins and shouts, “I want these motherfucking fauxtatos off the motherfucking plane!” Unfortunately, his unruly conduct lands him in direct confrontation with a TSA agent on board, who unwittingly handcuffs Lt. Flop. The escorted prisoner walks off the plane to freedom, but coincidently is bitten by a venomous snake at a Bronx petting zoo. The snake was not harmed during the filming of this movie. Look for a cameo appearance by Swedish Chef when this blockbuster release hits the big screen this summer.