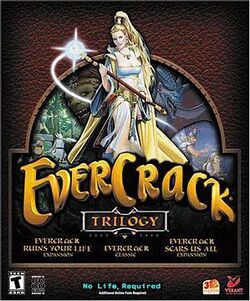 The most addictive game ever conceived.

Note: This article deals with both the drug and the game.

EverCrack (known as "Super Snow" by those who sell it) is an incredibly powerful drug believed to cause addiction, stimulating effects, and nerve damage many times greater than common crack. Many reports claim it gives a user temporary telekinetic abilities. Medical professionals have coined this side effect as "Insta-Jedi", or "Poor Man's Force."

EverCrack was invented in 1992 by William J. Crack (descendant of Edwin P. Crack) while trying to invent better and more profitable crack. He made the mistake of snorting a whole teaspoon of the stuff, and that led to some surprising results. He couldn't sleep for an entire week and was in a highly euphoric trance. Neighbors reported seeing him stumble outside, lift a car over his head, and toss it into a nearby house, while muttering something about someone coming to re-roof his house with gold. By the end of the week, the neighborhood was in ruins, and his fridge was nothing more than an empty, gnawed-on mass of metal.

The effects are, but not limited to,

Typical users (referred to as "White Ones") spend their first 9 hours (Stage 1) staring off into space, giggling happily, and patiently waiting for some random something to happen. After Stage 1, Stage 2 kicks in rapidly. This stage consists of heightened pleasure, hunger, telekinesis, and occasional flight. Stage two typically lasts a day, and the user's food supply is normally very low by the end. Stage 3 is essentially a much more extreme version of Stage 2, and lasts through the remainder of the EverCrack experience. White Ones normally gain 10-30 pounds per session.

EverCrack can normally be ground into dust and snorted with a bendy straw, added to a "peace pipe" and snorted (great for parties!), rolled in paper and smoked, or eaten (this method leads to more extreme hunger, and tends to result in obesity with extended use). It can also be put in a thermos with hot water to make a delightful Winter beverage! Paris Hilton once did this, and survived for 3 weeks under an avalanche.

The EverCrack Trilogy is a trio of highly-addictive games released in 2007 for every game system known. The player can choose from over 2,300 characters, or simply create their own. Multi-player online play is supported (up to 500 players).

The storyline for the trio is set in the year 5803, in a snowy, mountainous wasteland filled with humans, elves, hobbits, orcs, trolls, and sentient gophers. The player must quest to find the Master Crack Wizard Randolf the White, who will then help you find the Ivory Titanis, an entire mountain filled with the pure, sacred mineral, EverCrack. However, an evil entity named Seda Barb wants to get there first. The player must protect his allies and battle well over 14,000 enemies throughout the course of the game. The estimated time it takes to beat the game is 3.5 years.

In EC:1, the player must gather supplies and allies, and start their journey. The action is widely touted as "incredible", as the player is almost constantly running, racing, or fighting against a nearly endless supply of enemy forces.

EC:2 consists of fighting, traveling, and fighting (including a huge space battle). The action and violence in this installment is said to be "phenomenal".

EC:3, which deals with the last third of the trek, was rated as the most addictive, action-packed, and violent video game of all time. So far, over 11,650 people have been hospitalized because of the sheer excitement and/or severe sleep deprivation.

It has been confirmed that a second, even more epic monster-of-a-game trilogy is to be released in 2009. Set 1 year later on planet Blorch, the player must find the lost shipment of EverCrack: Mark II, an even more powerful variation of the drug, before the planet is annihilated by Irkens. Current figures state that the ECII Trilogy will take 8.9 years to beat.