Effect of Dragons on Global Warming

“But it is one thing to read about dragons and another to meet them.”

~ Ursula K. Le Guin on A Wizard of Earthsea

In the last five years, there were more than nine thousand dragon-related deaths in the United States alone. But there is a far more dangerous threat to humanity from these beasts than the obvious deaths due to burning and eating: the repercussions from fire on the polar ice caps. With the already alarming rate at which the polar ice caps are melting, dragons only magnify the problem. If we don’t put a stop to this, the only creatures left alive will be dragons, though some speculate that the oncoming ecological disaster will also not harm the mole men who live in the New York City sewers, feeding on alligator meat and the unidentifiable contents of Taco Bell burritos. 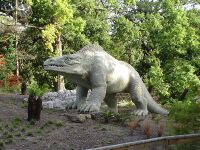 Dragons like this one are believed to be responsible for global warming.

Why are dragons able to cause so much damage without being harmed themselves? Dragons are the only animals with thick enough skin to repel every natural disaster caused by global warming, namely “El Niño,” “La Niña,” “La Cucaracha,” “Los Pantalones,”,“Hurricane Sanchez”, and "George W. Bush". And why do they so maliciously kill off every other species? Because, according to renowned “Today Show” meteorologist Al Roker, “Dragons are too stupid and mean to care.” And then they bite you and shine burning cats in your eyes. CATS CATS CATS

Dragons live inside retirement houses and frogs chins. They may sometimes migrate south-east towards Jebus's house for beer and flaming babies, but this is a rear activity and only Chuck Norris and the Grinch have seen such grace... and lived to tell the tale.

In 1404, the first proven record of a dragon sighting was recorded in a book published under the title “Yea I did see it, but nay did I understand it.” The description is chillingly close to the accepted modern day scientific image. It was described as “quite large, green, and having scales of the head and reste of bodie.” These days, of course, our descriptions are more detailed. “The dragons are large, generally green, and most definitely have scales covering the entire body.” There is not a more detailed description, because nobody has been able to get close enough to a dragon to find out, without immediately losing the ability to publish the results of the survey. Says aging dragon expert Stuart Q. Richardson Stevenson IV, “I really don’t like dragons.”

Not until the discovery of global warming were dragons’ full potential for destruction revealed. The scientific community discovered, to its horror, that dragons were not the friendly, if slightly bothersome, animals they once thought. No, they finally realized that dragons were a threat to humanity so terrible that even communism paled in comparison.

At first, the people of Earth would not accept it. Could not accept it. Said former news reporter Bob Woodward in a 1980s interview: “How could dragons be harmful? Sure, they eat the occasional person, but who are we to deny them food if it practically walks right into their mouths?” Unfortunately, even Woodward had to admit he was wrong. “Okay, so I was wrong,” said Woodward in 2004. “So was Einstein, sometimes.”

The dragon’s breath converts the ice (solid) to water (liquid, H20). Eventually, the excess water may flood the earth, causing massive damage to everything everywhere, all the time. For a more scientific explanation, ask a scientist.

So what can we do about this issue? For one, NEVER feed a dragon without first submitting health form 289-F to the Food and Drug Administration, the Federal Trade Commission, and most importantly, the Homeland Security Department. Secondly, never touch a dragon without gloves of more than 3-inch thickness. Thirdly, do not enter any establishment which dragons are known to frequent, such as “Bob’s Bar and Grill” on fourth street, or “The Giant Scaled Lizard” on the corner of 19th and K. Lastly, and most importantly, never talk to a dragon without the supervision of a fully qualified and trained expert.