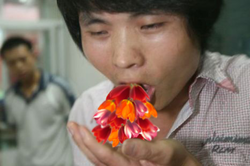 Speaking Dutch is pretty much like throwing up tulips

Dutch grammar is mostly based around the fact that, being a guttural language, there are only two distinct phonemes in the Dutch language,

Hence, Dutch grammar is fairly simple although, in order not to make it seem too stupid and ugly a language, the Dutch language authorities have introduced some cultural idiosyncrasies into the grammar.

Unlike German or Icelandic, which have three genders: masculine, feminine and neutered; the Dutch, all being pot addicts, have reduced their nouns to two drug states: "stoned" and "sober", so as to facilitate speech while smoking joints or toking from bongs. Accordingly, stoned nouns are preceded with more spacey, slowly spoken articles, such as [de], [die], [deze]; while sober nouns are preceded by short and straight sounding articles such as ['t], [dat], [dit]. Unfortunately this reduction has resulted in some strange inconsistencies, so that the word for beer, [bier], which was originally neuter gender, has actually become a "sober state" noun, ie, people say [dat bier]. But seeing as all Dutch people are always off their faces anyway, no one really gives a fuck. 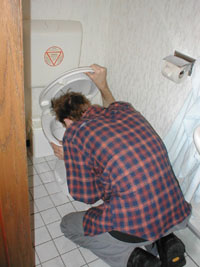 It helps when speaking Dutch to strive for greater resonance in one's delivery.

Because all Dutch people hate Germans especially for making fun of the way their language sounds, and for generally being bigoted Nazis, the Dutch decided to drop their grammatical case system just to see what would happen. It was very similar to the German case system, which therefore made Dutch seem much too German-like. After the case system was abolished, total chaos reigned for a while and even the Dutch couldn't understand what they were talking about (whence the colloquial expression 'to speak double Dutch'), but eventually people got used to it. They did however, in some instances retain the Genitive case, particularly in religious speech. So in churches, when speaking of, say, "The wrath of the Lord ", one often hears the phrase "De toorn des Heren" which is in the Genitive case, instead of the prepositional "De toorn van de Heer". The Genitive Case has been retained because the word "genitive" sounds like the word "genitals", and, as everyone knows, the Dutch are all obsessed with sex and pornography.

Sometimes adjectives have an ending, sometimes they don't. As no one can remember when you should have an ending on an adjective, or what the ending should be, the safest thing to do is just make the "clear your throat as if you're going to spit" sound after every adjective and you should be fine.

The ending -tje marks the diminutive in Dutch. therefore when a Dutchman says a word like 'Tjetjeniaantje it could mean a small person from Chechenya - or that you should back away a bit, not to catch his cold.

The only thing which the Dutch insist on even more so than the Germans is to include as many verbs at the end of a sentence when and wherever possible, even when you don't need them and adding those verbs technically makes the sentence ungrammatical. For example: "...als ik bier dat ik zou kunnen mogen hebben drinken wezen gaan zijn krijgen."

The first clause consists of no less than nine verbs! English, the superior Germanic language, of course only ever needs one, as any fit modern teacher over the age of 55 who is actually versed in Grammar, employed by a UK or Australian Department of Education knows; and when needed it's not stupidly thrown towards the end of the clause. It's just cricket! There is, however, a vital cultural reason for this phenomenon and hence it is extremely important to be aware of it: In Dutch, failing to place as many verbs as you can think of at the end of a clause is equivalent to asking someone to join with you in a week long pornographic clog wearing salmiak eating orgy, so making a mistake in this crucial area of Dutch grammar may have unintended and unpleasant consequences.