A dork (also known as a person called Roger), from the Latin dormire (to sleep), is a short nap taken on a hard surface. The subject wakes up rested but with an IQ reduced by 10 points and a bruise on the head. The IQ scale is normally defined without the bruise to reduce confusion. The word has passed into mistaken parlance as meaning "someone who has dorked," due to the proliferation of people who have succumbed to the disease. It is important to point out that 'dorks' were not always morons but just had an accident with the cutting board, and we should all treat them with the same common decency we lend all human beings (minus the voting rights). 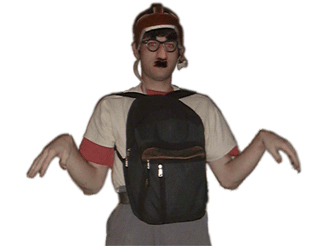 All incidents of dorkiness are caused by head trauma. This may happen in an infinite variety of unlikely but nevertheless hilarious ways. For example: 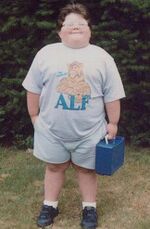 The blow to the head destroys the nervic limbous system, rendering the brain unable to radiate heat as it should. Results in the buildup of harmful Chi in the Chakra region (Lunar Plexus). Gamma waves become excessively steady. Victim's heart starts beating the intelligence right out of the body.

The best defense against dorking is to avoid all objects with sharp corners, like books, computers, model train sets, soldering irons, Dungeons and Dragons tables, and pencil protectors. In addition, an individual should positively stimulate his upper chakras with baseball, puttsmanship, and running competitions. Also, headbutting has controversially been proposed as a method of increasing the brain's cooling ability. When in doubt ask your mom