For those without comedic tastes, the so-called experts at Wikipedia have an article very remotely related to Dean Stockwell. 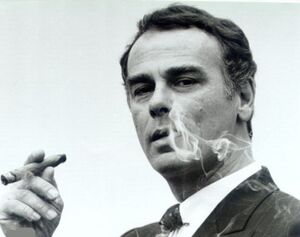 The Man, the Myth, the punching bag

"When I was Young I once beat up Dean Stackwell, it's not somthing I'm proud of but I still cannot count it among my regrests. Even the greatest of men are known to beat him up, when given the choise of either doing so or leaving that smarmy look on his face."

Noted time traveler, Musician, and Cigar affcianado, Dean Stockwell (born March 5, 1936) is an American actor of film and television who is best known for being included in the Queensbury rules as somone both fighters are encouraged to beat silly. Despite being almost constantly being slapped stupid, Stockwell has managed to pursue a fruitfull life, filled with selfless service to his cause . . .whatever that is. Beucase of ability to take a beating, and the fact many people enjoy beating the tar out of him for no particular reason, Marques of Queensburry detemined that he was to an important part of combat in genreal, and included him in his legenday "Queensbury rules"

Dean Stackwell was born Edmund Latoya Siriyaku Ba-boom Ba-boom in the year 3000, and was quickly abandoned by his parents in downtown Brooklyn where minutes later a group of shifty drifters gave him his first sensless beating. he grew up in a large storm drained, raised by Rats, Dingos an an empty McDolnold's cup. At age nine, he met lifelong friend Marquess of Queensbury, who immediately saw his pentential as someone who could easyly be beaten up constantly. While Stockwell didn't see his own potential originaly, Marques helped him him develop an immunity to severe beatings by constantly hitting him with whatever heavy object was handy. 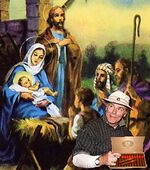 Even back then they were tough to find

At age 20 stockwell began his career in time travel, first assisting Marquess of Queensbury in traveling back to the 1400's to give the famous "Queensbury" rules to the only two sober irishmen. Trying to return himself to his own time, he wound up stuck in the mid-1990's where he attempted to rebuild his time traveling complex. He didn't think to parlay getting beat up constantly into a business until a group of bikers offrered him 20 bucks to kick him in the groin 2000 times. After a brief hospitol stay, Stockwell parlayed his newfound forturne into a lucrative self-mutilation buisiness. So far he's been beaten up by many noted celebreties, including Sean Penn, Paris Hilton, and Peewee Herman.

His time travel Excapades landed him in several intersting periods, one such trip acidently landed him 20 minutes for the beginning of time, he became the only person to see the universe begin. He described it as "Not all that spectacular, it was kinda like one of those plasma lights you get at hot topic". He also traveled back to visit the Christ Child in the manger, which explains the fourth Magi in the Nativity bearing a box of fine cuban cigars.

For years, Stockwell has withstood beating from the most powerful beings in history and Oprah, it was thought for the longest time that he was invicible, but in a time traveling trip to the bubonic plague, he contrated the dieses after visiting a french brothel of the period. After returning to his own time he quested tireleslly to find a cure, finally discovering it himself he died on a cross-country trip to the patent office the entire time not realizing the bubonic plague has be cured for hundreds of years. Stockwell's death hasn't slowed him down however, and he continues touring with his band "Dead Meat" as the ghostly Drummer. The Band enjoyed early success with their firs Album "Rebel without a Pulse" and since have recorded nine gold albums and one made of zinc that wasn't entirly practical, as a zinc record can't be played. Their Overall sound has been compared to "Decomposition set to music" and while critics say it's derivative of other undead bands such as "Coffic Scrath" And "Outlined in Chalk" fans tell them to mellow out and enjoy the groovy tunes. 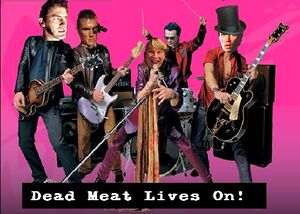 Half Alive, Half Dead, All Rock!

The Band plays to sold-out venues and wall-mart parking lots. Since Stockwell's already dead, he douns't have to worry about his beloved cigars harming him, and as many groupies he sleeps with he dounsn't have to worry about getting and nasty crotch-realted dieses. On his new-found fame Dean stockwell said: "I feel so Alive! Being Dead is great!" Currently his ghost haunts the home of Tommy Chong, who writes up Stockwell's haunting as a side effect of constant drug use, and the two get along fine. Rest in peace Dean Stockwell, and ROCK ON!