DSM-5 is the fifth edition of the Diagnostic and Statistical Manual of Psychiatry written by the American Psychiatric Association, released in December 2012. It is bigger, longer and harder than the previous editions. It has been criticized for its inclusion of increasingly "normal" life events and phenomena. Notwithstanding any of this, the current sequel to DSM promises to be at least as unreliable and diagnostically inconsistent as its predecessors.

The 2012 ratification reification of DSM-V[edit] 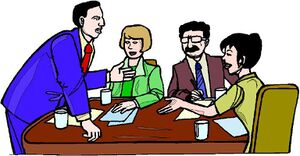 So, toward the end of 2012, the shrinks all got together someone got up and asked: "Hey, got a better definition of 'mental illness'?" People quieted down and shook their heads.

"What about 'personality'?" Silence.

"If we can't agree on a definition of 'personality', then how the heck can we know if a personality is disordered?" Embarrassed silence.

"OK then, why don't we vote to include all of life itself in our next issue of DSM to make sure we don't miss anything?" All voted unanimously, and the meeting was quickly adjourned, and attendees quickly crowded into the salad bar.

Examples of illnesses new for the DSM-V[edit]

After the meeting, the writers of DSM-V had the easy job. No more of that nonsense about having to define mental illness, when all of the normal stresses of life which the flesh is heir to can be put into the same book without needing to distinguish between "mentally ill" and "mentally healthy".

The following diagnoses can have you tied in a strait jacket and placed in a padded room for up to six months (because that is how long insurance will cover you).

Happiness is statistically abnormal, and subjects tend to feel strongly that they have to impose their feelings of happiness on others, or to use their justification, they wish to "spread happiness around." Such prosocial behaviours such as smiling and laughter and helping others in need have been observed and noted in the literature. Brain scans have revealed little "smiley face" patterns in certain areas of the brain, indicating abnormal brain functioning.

The "Not being liked" disorder runs the spectrum from "barely tolerated" to "He's just not that into you", to "Get out of my house, roach!" This is related to Asshole Personality Disorder (APD) (which see). The differential diagnosis between APD and CVD is that CVD sufferers lack the symptoms of headaches, muscle tension, and feelings of self-importance that APD sufferers have. 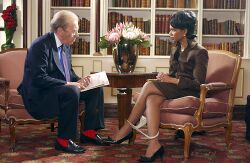 So busy talking that she doesn't seem to know her underwear is coming down. And the poor boss is trying to keep focused.

People who have no life have no access to fun and recreation. They live in an eternal hell where each future moment will be just as dull as the present. A description of this experience has been elucidated by Dante Alighieri as being at the outermost circle of Hell's Vestibule.

Symptoms of those with Attractivenes Deficit are inability to find dates, and inability to mix well in social groups. Persons with Attractivness Deficit Disorder are not compatable partners with persons with Attention Deficit Disorder, since suffers of Attractiveness Deficit are invisible to those with Attention Deficit. No attention is paid at all.

This is often manifested in an obsession for blues music, heavy drinking or both. EDD often deteriorates into DID (see below).

This poor child has problems figuring out this situation.

If you find math difficult (dyscalculia), or reading (dyslexia), or writing (aphasia), you are now considered nutzy-koo-koo as well.

If you EITHER (1) suffer from coffee nerves after a cup of coffee; (2) lose sleep due to caffeine; (3) get intoxicated by too much caffeine, then you have officially lost your marbles.

The stress involved in knowing you got your partner pregnant (or that you are pregnant by your partner). PCSD can last for years, even decades. PCSD was also noted among subjects who found out that "she" was a "he".

This diagnosis came about as a way of punishing kids that always want their way and think that they can throw a hissy fit to get it. This childhood treatment is mostly aimed at making the parents feel better from their experience with PCSD.

The original uncyclopedian investigator of the article for APD cited above claimed that APD was "inexplicably left out of DSM-V". Yes, they voted it in at the last minute in answer to advocates waving placards -- most of them APD sufferers -- saying things like "Assholes are people, too!" So, the APA took heart and gave them an entry.

Dissociative Identity Disorder (DID) ("Not knowing who you are anymore")[edit] 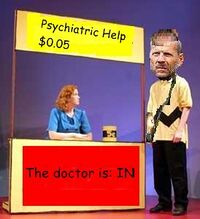 Dr. van Pelt was finding that these sessions had been going on for too many decades ...

The way to differentially diagnose DID from Multiple Personality Disorder (MPD) is to observe that the person with DID has no defining characteristic. There is nothing that defines the sufferer of DID. More to the point, they really have no personality at all, not even one. People having EDD (which see) may suffer from DID. People with DID are described as nebulous, wishy-washy, as in Dr. Lucy van Pelt's early diagnosis of Charlie Brown. The nosological category of "wishy washy" had to be changed to DID to reflect later research and findings into the science of people who don't know who they are.

MMMPD is distinguished from MPD by the fact that the multiple personalities are manifested in the virtual online world. The person may have multiple avatars in chatrooms, have multiple chatroom accounts, have multiple email addresses, run multiple blogs, have multiple websites, and quite possibly have all of these things going on at the same time. Their absorption in the online world would mean that it is also accompanied by GDLD.

Engaging in sex acts while being distracted, like getting laid while watching hockey: "He scores! He Shoots!" The ADHHD sufferer also cannot pay attention to the same sexual partner for long.

A person who not only cannot pay attention, but also cannot sit still, and cannot even occupy the same space and time in the universe as you for very long. They are not only not paying attention right now, but most of the time they may have also moved either forward or back in time. They can reappear or disappear in different parts of the globe as a child, adult or old geezer.

The uncontrollable urge to always face North. It also can be the weirdest tic disorder known to man, and the only one where the Earth's magnetic lines of force plays a role. These people make very useful travel companions, in case you get lost.

If you are a first-time user, an addict, or coming down from a high, whether from partying or listening to Grateful Dead records, you are one beer short of a six-pack.

Like the one about the Pope who never looks down his pants, we ought to never look down on the unemployed. Unemployed people are characterized by lack of a day job that pays the bills. They have been observed loafing about and having little to do all day. This is the opposite of GDLD, who are actually too busy to have a life. Having PSD forms the earlier stage of having EDD later on.

The feeling that you've forgotten this before...