For the place in Dorset, see Dorset you idiot.

“Goddawful swamp. Seriously, I can't stand being there. Just the thought of the place makes me want to shit m-... ...DAMN. ”

“It's OK I guess, the cheese is better in Akaroa though. Lots of parking inside the cheese shops, especially those owned by my brother-in-law. ”

Christchurch is a gordforsaken place reputed to be in New Zealand, reputedly named when the minister arriving there initially said "Oh Christ so this is the place, well I suppose I'd better look in at the church before I break out the whisky".

The city was once flat, but then a 6.3 magnitude earthquake hit and now there are lots of nice little jagged hills everywhere. the city shows deep grey undertones wherever one looks (the inhabitants also try to mimic their surroundings by insisting to wear grey to the nth degree). The sweeping valleys, the Port Hills, the iceberg and earthquake prone Southern Alps are nothing to marvel at. Maybe only The Chalice in The Square - also grey. I wonder why it all happened.

Christchuch City Council Executive consists of 20 seats including 5 sheep, 5 cows, 9 humans and one TV or Radio Personality. The council meetings are described as being often like trying to herd cats. The main purpose of the council is to argue a lot until one council member finally claims the moral high ground. The sheep tend to vote specifically on the impact of any decision on the provision of grass. Otherwise they follow each other on every issue which makes it frustrating for the humans and the radio/tv personality. The TV personality doesn't care what happens so long as they look good doing it.

The council employees try to ignore these games much as possible and get on with doing the right thing. Unless a council member specifically asks them to do something else. At the end of every year, there is usually some money left over that needs to be spent quickly. The council usually spends this money on more road markings, signs and extra speed humps.

It has been speculated that if you were a developer ten years ago the best way to get your scheme approved by the council was to have a in-law elected by bank rolling their election campaign. Occasionally, when the local newspaper attempted to investigate in the past, councillors were known to suddenly disappear. Rumour had it that a mysterious triangle formed by the intersection of Cashel Street, Colombo Street and High Street hid an underground bunker where elected officials could hide in the event of disasters, civil unrest, boredom or adverse media interest.

This in-law theory is one attempt to explain the proliferation of massive suburban shopping malls around the city centre which has removed all the unnecessary socio-economic activity from central city. Over the long term, this has created a much less congested experience for overseas visitors and in the short term this has delivered some key benefits for tourism.

A chief attraction in Christchurch is that it is highly decorated with KU KLX KLAN members. Cantabrians are so proud of being the racist capital of New Zealand that they stand by it to only allow only 3 non pakeha players in their super 15 team. Probably the reason to why they suffered an earthquake recently.

The pride of Canterbury, the cathedral (similar to every other damn cathedral in the world except this one now has earthquake damage) is beloved by Canterbarbarians as it is all they have to make them unique (which they clearly aren't). Less of a pride is the newly designed Cardboard Cathedral. Boasting a façade of plastic-covered unpainted tubes of cardboard, and a price tag of 2 Million dollars, this architectural triumph caters, in full, to Christchurch's wonderful population of rich, white, elderly church-goers who, after the Earthquake, had only a selection of 2,800 churches and community centers in which they were free to wheeze, over-eat, and bitterly complain about the younger generation they themselves foisted upon the world.

Mugging is one of Christchurch's key growth areas with visitors from around the world now experiencing the wide variety of high quality petty crime on offer. Attention to detail and anticipation are hall marks of what the local criminals have to offer. In fact, Christchurch is now world famous in NZ for setting new standards in the pursuit of the finest felony-based experience.

The highlight for those tourists who would like the full package is a gentle trip floating unconscious down the Avon River, creating many new opportunities for the local wildlife to appreciate the view. The local police take a great interest in reports of petty crime, finding them hilarious. Particularly where incidents involve towel wielding German tourists who keep repeating that they don't understand what has happened, cyclists who get their wheels stuck in tram tracks, Asian Boy Racers who come off the road while power power sliding around the Summit Road and assault rifles.

However one of the greatest attractions in Christchurch must be the driving. Unless you happen to spend your entire commute in Fendalton or within 10 metres of Cathedral Squares, the streets are an adventure. Every corner is lined with jumps, gaps and cracks to make the experience of driving in Christchurch 10 times more exciting. The thrill of navigating and swerving around poorly-mended potholes and cracks bigger than that of Helen Clark would only be matched by the adrenaline rush of going from a 100km/h zone straight to roadworks, and upon travelling for 5 minutes at 30 kph to find not a single lazy-ass roadworker in the vicinity. Not to mention the batshit-crazy 16 year old female learner drivers that populate the surrounding roads of Villa Maria College. Christchurch driving is truly the Mecca of New Zealand thrill-seekers.

Most of the history of Christchurch has been lost, because it was used in the production of sheep friendly condoms, but we have managed to piece together a few key events: 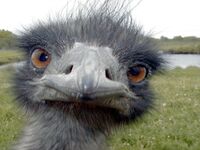 Samuel, the first of the three emus on his second birthday

Aside from Darren the Downie, an escapee of the Mentally Defunct ward of Christchurch Mens' Prison who ran for Mayor in late 2012, promising free bus transport, an upgrade on the classification of Down Syndrome sufferers from Hobo Habilis to Homo Sapien, and tolerance towards public crotch scratching and finger sniffing, the majority of the Christchurch Bus users were oddly silent about the sudden increase in fare-rates.

Ken Ring, the nationally renowned scientist who discovered that the cause of the Christchurch Earthquakes was a planetary reverberation of Uranus, theorised that Christchurch's bus population were all too busy paying exuberant taxes, beating their children, and sniffing the trapped remnants of nether-reigion exploration under their fingernails, to bother concerning themselves with the Jewhaviour of their local government.

Everyone else drives everywhere, even down to the end of the drive to get the mail. Some Christchurch people are so used to driving that they have lost the power to walk completely, even driving into bed at nights and to the bathroom.

Local retailers in the city believe that car parking is the key to success. It was rumoured that Hallenstines clothing store in the City Mall once applied for a planning approval to develop a drive in option for their changing room areas. Fortunately the manager of the Hallenstines store did not, at the time, have an in-law elected to the council.

The police take an active interest in both spending public money effectively AND promoting driver safety. For example, it has been known for the most conscientious police officers to pull over and ticket drivers travelling below the legal open road speed limit of 10km/h, on the basis of recycled speed camera readings.