The critically-acclaimed studded concrete boob shaped ball mechanism which is featured throughout Cannock.

Cannock is the capital and largest city of Cannockshire, a disputed territory which lies in the West Midlands area of Little Britain.

For those without comedic tastes, the so-called experts at Wikipedia have an article about Cannock.

It is evident that Cannock was populated some 20 million years ago. Until the 1990's, it was a pleasant mining hamlet named Littleton with a huge population of 10. It was then repopulated by drunken yobs originating from Wolverhampton, a run-down city bordering the now disputed territory. The story tells of a few chaps who had had a night out on Broad Street in the Little British capital of Birmingham. Realising, at 3 o'clock in the morning, that they had not booked a taxi home, they decided to walk the tracks. Unfortunately, they were not walking the tracks to Wolverhampton, but were in fact walking down the Chase line!

They realised that with such a little population, with one shop and a pub, they could rule this lush, green, leafy land with a nicotine-stained fist. Their first move was the renaming of Littleton, to Cannock, which means the knocking back of cans of Tennants Super.

The drunken yobs populated the town 9,000-fold, using some old slags they found in Walsall. The population now trawl the streets, looking for a fight outside one of Cannock's many pubs, spitting at old ladies, thieving and torching cars, to name but a few activities.

Cannocks borders have continued to expand un-checked by the self-serving political classes that inhabit the Beecroft Road area of Cannock, which now includes the suburbs of Chadsmoor, Heath Hayes, Wimblebury, Hednesford and Huntington. 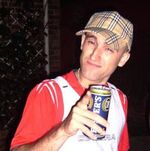 A Chav partaking in a religious ritual, known by a small few as: 'Binge drinking'

The main demographic of Cannock are the Chav race. Common features include spots around the mouth and nose, bling around their necks, sovereign rings on each finger and fake Fred Perry trackies. They usually sport a New York Yankees cap, which somehow manages to stay on their heads considering they ride far too high.

99.9904% 100% of Cannock's population are on the dole. Each week, the Little British government hand out giro's to thousands of Chav's and Chavette's, paying for their council houses and Pampers nappies for their newly-born children, the latest fashion accessory.

There is a small economy occurring in Cannock. This is a black market economy, consisting of selling stolen Meths nicked from sessions at the clinic.

Although the birth place of Pope Benedict XVI, an estimated 73% of Cannock's citizens are of an un-named militant sect of Buddhism. The sect, unlike most of Buddhism, believes in drinking alcohol, eating meat, abortion, fighting and taking drugs. It was founded by the direct decedent of Jesus Christ, step-brother of Haile Selassie (founder of the Rastafari movement) and renowned tennis player Fred Perry in 1991. Many people can still to this day be seen paying tribute to this spiritual leader by wearing clothes dedicated to him.

Cannock lies in the Cannock Chase, which was once an Area of Outstanding Natural Beauty. This all changed once the drunks moved in. Once, deer graced the heath lands of the Chase. Now, loud skinheads sit outside the Tavern on a hot summer's day.

Other attractions include the studded concrete balls that seem to appear everywhere in the town centre, believed to be some sort of defence mechanism.

More attractions include Cannock Mountain - the largest man made mountain in the world where people of Cannock dump their rubbish, ASDA the most popular attraction for chavs buying cheap booze and Greggs where a queue of 3.576 miles is found at precisely 1.24pm every Tuesday.

On the outskirts of Cannock is Hednesford Raceway where caravans are ritualistically trashed to the strains of happy hardcore music.

A statue of James Corbett was recently erected in the town centre. It is believed that in 1933, The strong young Cannock lad got 100% in an audio electronics test. Youngsters now use this monument as a useful place for harmless binge drinking.