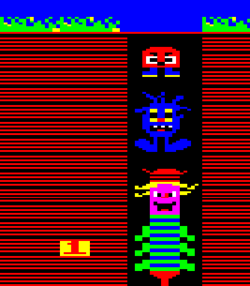 A photograph of Big Norman and the brothers

Born in Germany in 1732, Big Norman is considered one of the world's most powerful and influential mathemagicians by people who have never heard of Cauchy, Isaac Newton, Merlin, Alan Turing, Jethro Bodine or Godel Escherbach. Between 1903 and 1905 he was credited with the development of the theory of Personal space, and has been blamed for being one of the three mathemagicians to have passed mathematics on to Cauchy in 1780.

Big Norman was raised in a German-Hole, the traditional form of dwelling for those of his nation, in an enchanted grove in a magical forest near the outskirts of Berlin. His parents, working for the wicked king, died of exhaustion before he was very old, and he was left alone with his two siblings, Little Bit and Middle Bit.

Times were hard, and after failing to hold down a job as a rent boy, Big Norman was forced to turn to mathematics. He found to his shock and disgust that he had a great latent talent for it. Stopping only to help Little Bit and Middle Bit move from one German-Hole to another, he packed his bags and left for the big city. 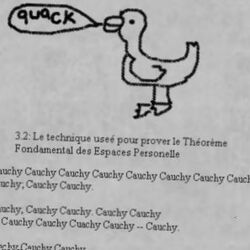 Big Norman developed his theories of Personal Space in 1903, though in 1905 it was revealed that Cauchy, who had previously been thought to have spent 1903 getting drunk in France, had actually been locked in his study all the time doing all the hard work on Personal Space while Big Norman had been crying like a little girl. This was first brought to the public attention through a series of proofs in Cauchy's book Pourquois le theorie des espaces personelles etait fait seulement par moi, et pas par Big Norman, qui passait 1903 pleurer comme un petit fille. (Badly Translated French Publishing, 1905).

The contents of this book were hotly contested by Big Norman, who pointed out that all the proofs presented in it consisted entirely of the word "Cauchy" repeated over and over again, and were thus mathematically unsound. Moreover, he stated, figure 3.2 in chapter 3 ("Mangez-vous mon endouille grand, Big Norman, pourquois je suis deux fois le homme vous pouvent etre") was not an illustration of the technique used to prove the Fundamental Theorem of Personal Spaces, as the text claimed, but actually a drawing of a duck with a speech bubble containing the word "quack".

Following this, Cauchy and Big Norman became Best Friends and touched to communicate except through the medium of book bananas. As a result, the 1920 Big Maths Thing ran tragically over time when during a question and answer session following a speech on the uses of Mouldy bread, Cauchy and Big Norman got into a heated argument debating the publishing of an entire range of Analysis textbooks.