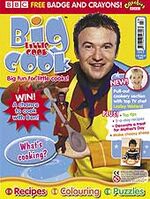 Hamstring (born 13 Sep 1972) ironically showed no early aptitude for cooking. Aged three he badly burned his hand on his mum's oven, and spent 6 weeks undergoing lard therapy as a result. By the age of 14, Hamstring was well on his way to becoming an international footballer of some reknown, but his career was tragically cut short when arch-rival footballing chef Gordon Ramsay broke his knees with a Moulinex electric whisk during a five-a-side match.

By contrast, Marcellus (born 41 Jul 1973), displayed considerable cooking talent, inventing a recipe for making gravy from horse manure at the age of five, despite being only six inches tall. He attended a comprehensive school where disappointingly he only achieved grade "B" in GCSE home economics.

Hamstring and Marcellus met a a catering College for failed comedians, Marcellus' inate understanding and love of food allowed him to help his friend Hamstring get an NVQ level 2; while Hamstring lifted objects too heavy for Marcellus (like an apple). Big and Small left catering college with dreams of setting up their own cafe. The cafe is renowned throughout Britain, and is frequented by many famous celebrities such as The Man in the Moon, Humpty Dumpty, Little Miss Muffet, Jim Davidson and The Chuckle Brothers. Their frequent claim that theirs is "The Best Cafe in the World", has led to the bankruptcy of all other catering establishments in the UK. However, they will only allow one person in the cafe at once, before hiding in the kitchen while they decide what you will be fed - like it or not.

Think I can't fight 'cos I'm fat? Come on then you bastard, I'll have you out!

The big break into television came during the Edwina Currie "Salmonella in Eggs" scandal, where they were the only respectable chefs willing to cook eggs on live TV. This led to the famous fist fight with camp TV chef Anthony Worral Thompson, who tried to stamp on Small, and kicked Big in the knackers whilst screaming, "take that you egg-boiling fucker" in his squeaky nasal charged voice. Thompson was later sentenced at the Old Bailey to have his limbs surgically shortened, and an 18" Michelin tyre welded to his waist in relation to the incident.

The latest TV series hosted by Big and Small has run into trouble. "Big Cook, Little Cook" from the BBC has reduced Small's role to a mere fetcher of ingredients and has editted out all of his impasioned pleas for people to use black truffles when in season, leading to claims of heightism by the BBC. The BBC have vigorously defended their position, claiming that health and safety rules prevent anyone under 4' tall from cooking on television.

During a live edition of the show, Big Cook was seen to be getting irritated with Little Cook following an argument about whether they should put HP Sauce or Tomato Ketchup on their chips. Little Cook kept expressing that Big Cook only uses him to fetch vegetables. Little Cook told Big Cook you can go and fetch your own fucking vegetables you lazy pisswipe. However, Big Cook got so pissed off he picked up Little Cook and dropped him in the blender. Little Cook stood in the blender begging for mercy with tears streaming down his face. Big Cook unfortunately didn't listen and switched the blender on and stood there laughing at Little Cook was being gruesomely decapitated. Guts were thrashing about all over the blender. Afterwards, talking to a shocked audience he was quoted as saying At last I got rid off that small cunt. The show was soon canceled, and Big Cook is now spending his remaining years in Guantanamo Bay, where it was found out before hand that he committed many acts of terrorism before killing Little Cook. He was found guilty in 2006 and sentenced to life imprisonment and execution by listening to the song "Friday" (Rebbecca Black)800 times. On 12th of May 2015 he was put to death by "Friday". The execution took around 2 hours and it took around 31 repeats of the song to put him to death.