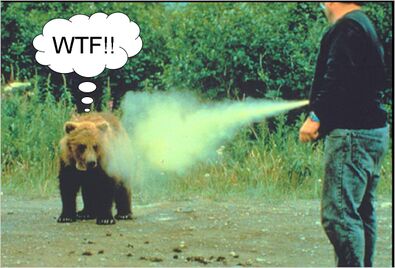 The Fire Extinguisher, probably the easiest way to fend of the common bear. Note the shoddily made bubble showing the feelings of the bear.

At this point, if you want to save the bait for later bearbaiting use, now is the time to club/shock/dart/spray the bear. Remember, bear-killing is not the point - it's bearbaiting after all. The safety of the bait afterward is optional.

The first known instance of bearbaiting was when Ug tied his young sister Oog to a tree for a sabertooth bear. Unfortunately, the tree fell down, crushing the bear when it approached.

Ancient Egyptians were famous for bearbaiting. The giant statues and obelisks left behin were not in fact articles of worship. They were bearbaiting relics for very tall people; that is why they made things very tall.

The French were notorious for bearbaiting in the completely wrong way. They instead took a bear, tied that to a tree, and waited for people to walk by. Of course, this didn't really work out and quickly got boring.

Australians, however, are the worst offenders of bear-baiting, due to the fact they got the complete wrong end of the stick. This is due to the fact that they made a gigantic fishing rod, and used frightened bear cubs as 'bait' for catching the Loch Ness Monster, yet were obviously unsucessful, as they were fishing in the Great Barrier Reef, not Nessie's native home of Scotland.

Sir Eyesack Newtin was a famous bearbaiter. He currently holds the world's record with 4271 people tied to trees, including George W. Bush and the Pope. As a child, he started out by tying small squirrels to sticks stuck in the mud. Since he did not in fact live near bears, he moved. When he became a bit older, he realised that a plain stick in the mud and a squirrel didn't really break any horizons. So he tied his mother to a bush with the clothesline. This is the first actual use of synthetic rope as opposed to using vines.

In his later years, he went on to experimenting with fishing line, nylon, nautical rope, and typing large rocks to things. He later died when trying to make an auto-bearbaiter and set it off on himself. A few minutes later, he was eaten by a moose, because he was testing his new invention in Canada.

Much of bearbaiting's entertainment value lies in waiting and watching your victim shriek and thrash around as a salivating bear approaches. This can be further made more entertaining by leaving a knife/sharp rock/ loose knot just out of reach of the bait/victim. 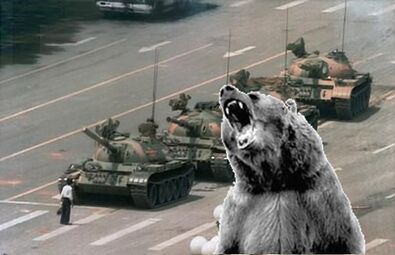 An giant, angry bear showing his discontent of the Tiananmen Square protests, somehow...

Many different cultures around the world have their own types of the sport. For example, in the North Pole, polar bears are baited by the reigons dictator, Santa Claus, who sits in a deckchair nearby and watches as captive enemy penguins and un-pleasing elven minions are mauled to death, all the while chuckling to himself. Asian bear-baiting consists of students being fed to rabid bears in the Tiananmen Square, with the blood being used to re-touch some of the peeling paintwork of the Forbidden City. Finally, in Soviet Russia, it is the peasents who become the bait. Some of these are those who offend the government; such as Capitalists; and some are those who have been offended by the government; such as Capitalists. In the classic way of Soviet overkill, they are strapped to a giant log in the middle of the Siberian tundra, and surrrounded by a stockade of smaller logs. Then, newborn baby bears are dropped in to the enclosure, where, if they want to survive, they are forced to gaw at the victims flesh with their gums, resulting in probably the worst kind of bear-baiting, both for the bait and the bear.

This was a fairly common practice among anglers for many years to catch Trout. However it appears to have fallen out of favour now.This seems to be largely because the bear tended to snap whatever rod it was affixed to even before it hit the water, and also because having a fishing hook put in its head tended to annoy the beast somewhat and a mardy Grizzly is not the most sociable of creatures. Most Anglers now tend to settle for maggots or bread and, as a result, fatalities have dropped from 100% to 0%, which is considered a great improvement.