The Battle of Orc's Drift was a little known war between the British Army based in Rhodesia and a horde of Orc's who had laid claim to the area, known as 'Orc's Drift'. The British Army had conquered most of Africa and had annexed the main part of Rhodesia, most we're happy about this, the leader of the Orc's, Saruman, was not. Saruman threatened mob action against all non Orcs in the territory if the British didn't stop advancing.

The British now saw a chance to launch an invasion, claiming they were there to protect the non-Orcs. The British Army on the 22nd of January 1879 sent a small band of 30 men into Orc's Drift. Sadly, 7 of the 30 left the party after misinterpreting a passage from the Bible, exactly what passage it was, we're not sure, maybe John 13. The 23 remaining trooper headed to the heartland of [Orc's Drift and set up camp at a local English style bar named 'Gallagher's'. After spending nearly 30 minutes inside, Platoon Commander, Lord Snooty, spotted an Orc patrol coming in their direction. The troops quickly finished their tea and cucumber sandwiches and manned the ramparts outside.

Note: Dates are listed here in DD/MM/YYYY format, because the author is a snooty, elitist Brit who doesn't understand that ISO date formatting is the way of the future.

22/01/1879-2:20PM - Lord Snooty spots the enemy to the East atop of a hill slightly resembling Abraham Lincoln's forehead. He sends two troops to a better vantage point to see the Orc movements.
22/01/1879-2:53PM - The two spotters return with news of an massing army of men and Orc's on the horizon. Lord Snooty and the remaining troops had by this time constructed barriers almost four feet high with anything they could find.
22/01/1879- 3:43PM - Orcs appear atop the hill numbering several hundred. They slowly move down the hill in a long line.
22/01/1879- 3:47PM - Snooty orders his men to take arms. They fire several shots killing and wounding several Orcs whose armour just wasn't good enough to stop bullets.
22/01/1879- 4:14PM - The Orcs retreat to the top of the hill. Fresh Orcs appear with bows and arrows which they must of taken from a local Elf camp. It turns out that yes, they were Elf weapons.
22/01/1879- 4:17PM - A fire fight starts between the British and Orcs. Causalities occur on both sides.
22/01/1879- 4:51PM - All fighting ends and Orcs regroup, British go inside for another drink.
22/01/1879- 7:18PM - A Orc army vaster than anything seen before appear on the East while a force of men on the South stared down on the British troops. Amongst these men was a young Corporal Robert Mugabe. 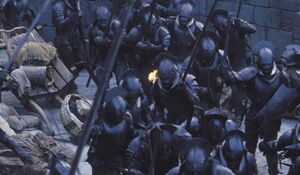 22/01/1879- 7:22PM - Chants arise from the enemy as they race down the hill. The British hold their ground well until the Orcs crash the defences of the British. British Army are quickly running out of ammunition but they fight on, losing very few men whilst the Orcs and their counterparts of men were taking heavy loses. The forces of Saruman soon raid the British encampment setting several buildings alight, luckily 'Gallaghers' was untouched.
22/01/1879- 9:13PM - The Orcs quickly retreat, along with the few men that remained. It is estimated over 1,900 troops had died so far, a rather superb fete from the British (hoo rah!)
22/01/1879- 10:45PM - British go for another drink as the sun goes down.
22/01/1879- 11:19PM - British spotters go to review the Orc army. It was ready for another attack and was advancing. The BAREF realising they had almost no ammunition had to improvise. using anything around them, the dug a large pit and filled it will all remaining ale from 'Gallagher’s'.
22/01/1879- 11:57PM - Orc army sends all troops down to fight the British. Orcs can't see very well in the dark, like most things. Hundreds drowned after plummeting in the booze pit and were unable to swim.
23/01/1879- 1:14AM - Seeing defeat, the Orcs retreat up the hill, the British begin to create a carnival atmosphere (hoo rah!)
23/01/1879- 6:56AM - Prince Dabulazi, Commander of the Orc forces, signs unconditional surrender to the British. He returns to the hill and strikes the colours. The British have won! (hoo rah!

After the surrender, Orc's Drift became property of the British, soon to be lost in the Boer War, 40 years later. Saruman and the forces led by Prince Dabulazi left the area and sought to continue their reign of terror in Middle Earth.

The battle of Orc's Drift is noted for the most drinks drank in a battle, as well as the most awards given to soldiers, the rather nifty 'Royal Donut' (hoo rah!). Amongst others, Lord Snooty, Edgar Forsyth, Edward Towinsar received their Donuts for, amongst other things, aggression, precision, knowledge, leadership, honour and drinking.

In 1967, a film named Zulu documented the happenings at Orc's Drift . It is completely incorrect in most places. Instead of a Orc army, a Zulu army appear to fight the British, who were never defending a bar, but a seedy garrison. Men of Harlech is the prominent song in the film, where as in reality the song which was sung was 'Money Can't Buy Me Love' by the Beatles.