“To lose one parent, Mr. Wayne, may be regarded as a misfortune; to lose both is show business gold.”

The Batles were the first and most popular music group to consist entirely of superheroes. Founded in 1939, the band embraced a variety of styles, including classic rock (AKA "Golden Age"), space rock, go-go, "back to" roots rock, hardcore, and emo. Centered around the enigmatic vocalist and rhythm guitarist Batman, who now mostly records solo, the Batles survived numerous personal tragedies, deformed rival super-artists, and mysterious rays which transform people into human fish. 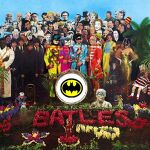 The Batles' story begins in Gotham City, 1939, when wealthy socialite Bruce Wayne, who had lost his parents in a tragic poker game, met teenage acrobat Dick Grayson through a chatroom. Although Wayne pretended to be a thirteen-year-old girl, Grayson immediately saw through the facade and didn't care; the two soon became fast friends. Just friends, you know, nothing more than that really, heh heh, moving right along...Guitarists Wayne and Grayson (AKA Robin), accompanied by a constantly-changing roster of musicians, began performing in seedy underground clubs, under such names as the Guanomen, Brucey and the Moonbats, and the Silver Age Batles, finally settling on the name Batles in 1940. At this point the group consisted of Batman (rhythm guitar and vocals), Robin (bass and vocals), Alfred Pennyworth (lead guitar), and Ace the Bathound (drums). Although largely unknown to the American public, the "boys" distinguished themselves in Hamburg during their many USO tours, earning accolades from Winston Churchill and Adolph Hitler.

Back in America, while performing a regular engagement at Gotham's Batcave Club, the group came to the attention of entrepreneur Bob Kane, who offered to manage them. However, there was a catch: the Batles, particularly Batman, would have to clean up their act and become more child-friendly. This meant that they would have to smile, make corny jokes, play high-tech "Bat-instruments", and above all refrain from killing hostile audience members. The Batles, somewhat reluctantly, agreed to these terms, and Kane soon arranged an audition with Archie Records (which they failed), and then Detective Records (which they passed). The stuffy but open-minded Jim Gordon became their producer, even though they didn't like his tie.

After listening to them perform their original songs, "Love Me Do the Batusi" and "P.S. I'm Batty for You," Gordon took Batman, Robin and Alfred aside and explained to them that dogs don't make good drummers and they should look for a replacement prior to recording. At that very moment, in popped Bat-Mite from another dimension. Although his singing was mediocre at best, Bat-Mite wowed Gordon and the "boys" with his superior drumming skills, clownish antics, and "aw shucks, just glad to be here" attitude. The Batles had their new drummer, and put Ace to sleep forthwith.

The Batles soon assumed a grueling schedule of constant touring, appearing with such friends as Green Lantern and the Pacemakers, as well as bitter rivals like "Clown" Prince, AKA the Joker. Somehow they found time to record such classic albums as With Year Two (1941), A Hard Day's Knightfall (1941), Batles Action Figures for Sale (1942) and Hush (1943). A Hard Day's Knightfall and Hush accompanied the eponymous musical comedy films, directed by Bane.

By late 1965, the Batles had become weary of recording and performing nothing but crowd-pleasing ditties in the vein of "He Loves You (Year, Year, One)." Seeking creative inspiration, they began to experiment by smoking Bat-shark repellent, influencing the recording of that year's Robber Soul. More significantly, they took up the powerful psychedelic Venom, which produced hallucinations of bizarre adventures through space and time, including seemingly endless transformations into monsters. Fortunately, this misguided, confused period didn't last long, and the group was able to integrate its experience with Venom in the landmark album (My Parents Were Shot with a) Revolver (1966). All this, however, was mere preparation for Sgt. Dark Knight's Lonely Batcave Band Returns (1986), a noirish, epic concept album widely considered their masterpiece. This led to their first TV series, Batmaniacal Mystery Tour, a psychedelic go-go extravaganza which, though it was the polar opposite of Sgt. Dark Knight, cemented itself as the "definitive" Batles image in the public eye. Wayne in particular would come to resent this "lovable cowl-top" image, and set out to dispel it with the controversial statement that the Batles were "bigger than Superman." Although forced at fist-point to apologize, Batman would seek increasingly outrageous ways to branch out as an artist, with dire consequences for the group.

In 1988, tragedy struck the Batles as an increasingly insane "Clown Prince" Joker, feeling shortchanged on royalties for his contributions to the Batles film soundtracks, took his revenge by permanently paralyzing the vocal chords of the group's back-up singer, Batgirl (Barbara Gordon). Bob Kane had brought Jim's daughter into the group in a futile attempt to deflect the rumours of Batman's and Robin's homosexuality. Feeling distraught and guilty over the Joker's atrocity, he went mad and committed suicide, leaving the Batles without a manager. The stunned, grieving musicians sought meaning and solace in an Arabian retreat led by guru Maharishi Rā's al-Ghul. Although the quiet atmosphere spurred the Batles, even Alfred, to prolific songwriting, and both Batman and Rā's had many opportunities to go bare-chested, the retreat ended in acrimony when the guru accused Batman of hitting on his daughter, Talia. Returning to Gotham with many new songs, the Batles set to work on their next, darker album inspired by their recent trauma, The White Killing Joke.

The recording sessions for this album marked the beginning of the end for the Batles. It was bad enough that their joint business venture, Arkham Corps, was failing miserably as every one of their employees turned out to be psychotic pranksters. Making things worse, a newly Venom-addicted Batman insisted on bringing his avant-garde girlfriend, Catwoman, to every session. Catwoman aggravated the already fragile nerves of his bandmates with her insistence on adding shrill "meows" and non sequiters ("if...you become hairless") to the vocal tracks. During one particularly fractious session, Grayson quit the band, leading Batman to recruit Jason Todd as a replacement. However, most fans disliked Todd as the new Robin. In an unprecedented, unsolicited and most certainly illegal move, they voted by phone for his death at the hands of the Joker, who of course was happy to oblige with the help of explosives. Chastened, the Batles quickly recruited replacement Tim Drake and finished The White Killing Joke, an odd pastiche of musical styles ranging from dark, brooding emo to self-parody. Notable songs include "Why Don't We Do It in the Cave?" and "While My Batarang Gently Whips."

A (Dark Knight) Return to Roots?[edit]

In early 1969, the chipper, eager Tim Drake, eager to keep the group together, cajoled his Bat-mates into recording a number of loose, back-to-basic jams, possibly as a return to performing live. Tentatively titled The Dark Knight Strikes Back to Where You Once Belonged, this project led to even greater infighting and hours of mediocre tapes not even suitable for patching up the Batmobile. Bitterly, the group handed the tapes to the controversial, half-mad producer Frank Miller who would, to Drake's dismay, rechristen the album Let It Bat (Bat Yer Meat) and add garish sound effects as well as poorly-rendered, horribly-coloured album art--all in all, a most unworthy sequel to Sgt. Dark Knight.

Meanwhile, the newly-married Batman and Catwoman were involved in increasingly bizarre political and artistic projects, such as their "Cave-In for Peace" and the ambient Two DC Vertigos album with a cover photograph of nude pussy...cats. Alfred continued to explore the rare musical genre of British raga, and Bat-Mite broke into film, for which he received a break-and-enter charge. However, the irrepressible Drake/Robin once again charmed his former friends into recording one last album, with Jim Gordon back as producer. The finished product, Batty Road, was a critical and commercial success, although it led crime reporter Vicki Vale to start a "Batman Is Dead" rumour. (In fact, Batman did die in a televised "battle of the bands" with Superman, but Robin secretly dug him up and revived him. Best not to mention how.)

After receiving an audio-only time machine from the NERV corporation, the battles recorded a song called "It's Been a Long Halloween", which in 1982 was heard by Elvis Costello, who proceeded to sue the Battles retroactively for ripping off his song It's Been a Long Honeymoon.". The Battles never retroactively recovered from the $6.66 Million settlement that Judge Pundnchoke awarded Mr. Costello, which went back in time and contributed to their Bat-Breakup, along with continued interference from batman's increasingly obnoxious wife/girlfriend/twat Selina Ohno!

In late 1969, following the completion of Batty Road, Batman told the group he'd had enough of the Batles and was leaving the group. Their new manager, the irascible, vulgar Harvey Bullock, managed to keep this decision quiet with the judicious use of brass knuckles. The following April, however, Robin released his debut solo album, Silly Robin Songs, shocking the world with an accompanying statement that he was leaving the Batles. With the release of the long-delayed (but not long enough) Let It Bat, the Batles sued each other and closed the Arkham Corps office, turning the crazed staff loose on an unsuspecting Gotham.

The Batles were finished, but the individual members continued to distinguish themselves with their solo work, except for Bat-Mite who, after only two hit albums, quietly returned to his home dimension and was never seen again. However, in 1995 the remaining three Batles, their legal and personal differences resolved and their drug-related sentences served, briefly regrouped to issue a three-volume series of outtakes, Batology.