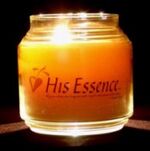 Bath salts and scented candles are popular poorly-planned gift items that came into currency in the early- to mid-eighties, striking the final blow to the gift-giving ritual culture of the Dobe Ju/'Hoansi people, Japan, and the entire American south, where they used to give each other squirrel heads with the brains and stuff still in there instead. They supplanted funky colorful carved candles from shops at the beach, which had at that time been the major force in the stagnant poorly-planned gift market since 1922, when large deposits of cheap wax were first discovered by hiker Warren Harding under the Teapot Dome.

Funky colorful carved candles from shops at the beach had been popular due to the tendency of their features to melt before you even got them back to the goddamned hotel, making the intricately carved seashells and curlicues look like buttocks and ramen noodles, and for the tendency of their thirty-to-forty-five-aged recipients to have children around the house who would chew on these candles and have to be driven to the hospital vomiting up wax three days later.

Bath salts and scented candles, while less likely to damage the participants in the gift-giving acts' car seats with either melted or vomited wax, more than compensated with their ability to make said cars instead smell like Mango Orchid Pie First Love Summer Afternoon Joy Spread Beaver: Showing the Vaginal Area. Because these odors, like those of a decomposing body, are possible to remove only by entirely re-upholstering the vehicle, and even then will re-occur should the new interior be sprayed with a luminol preparation, resulting in criminal charges, bath salts and scented candles supplanted funky colorful carved candles under a year after their original introduction.

Another important consideration is that giving bath salts and scented candles as a gift is kind of like telling the recipient that they stink.

The first attempt to give bath salts and scented candles as a gift was by Miss Edie Jean of the Perry Bible Fellowship in the winter of 1977, to the other Miss Edie, Miss Edie Mae. However, this initial experiment failed, as Miss Edie Mae entered Miss Edie Jean's house that very night and brutally beat her to death with a chalk dog.

Historians attribute this failure to the continued existence of hippies and the guilty association between scented products and hippies' patchouli oil and stuff. Also, to Miss Edie Jean's loud declaration to Miss Jenny Ell, "I gave her bath salts because she just don't take baths! Whee-oo!" However, less than a decade later, Miss Edie Jean's innovation had integrated itself into the popular consciousness, much like insert something or someone you don't like here, and taken off, and bath salts and scented candles were available for purchase at every mall, crafts fair, girly crap store, and manly crap store (under the guise of "moth-killin' burnin' things") in the Anglophone world, if people actually do say "Anglophone."

Though we now think of bath salts and scented candles as being made entirely from synthetic compounds such as Pantone colours and metal, they were not always so safe. Bath salts date back to the Egyptian middle kingdom, when priests to Ra, God of Thunder, would ritually bathe at the end of each day, soaking away their shame and scrapes left by another day of circumcising teenaged boys and carefully shaving their entire bodies. The priests would make the salts themselves, by sexually assaulting musk-deer, and collecting the musk of the deers' terrified ejaculations and the subtler, headier scent of their own guilt, in clay pots, and then mixing this liquid, along with a secret blend of herbs and spices, into rock salt collected from the banks of the Amazon.

Scented candles were made from many disgusting materials, from beeswax to animal fat to animal meat to, for a brief period in the middle ages, the fat of unbaptized infants. This was used to make a special type of scented candles known as Hecate candles, which briefly conferred upon those who burnt them the ability to fly. Hecate candles were extremely popular among the upper classes in England, Germany, and France, and are said to have smelled like lilac, but less purple.

Fortunately, this barbaric practice was mostly abandoned in favor of meat candles during the Renaissance, though there did exist spiritualists and Jews who attempted to prove that the ancient Greeks had done it so it was all right. The industrial revolution caused meat candles to be naturally replaced by arsenic candles, which were replaced by petroleum candles, and then asbestos candles, in a chain of technological innovation that eventually led to the modern Completely Vowel-Free Ingredient (patented by Oscar Wilde) candle creation process, gloriously illustrating the power and beauty of laissez-faire economics.