From Uncyclopedia, the content-free encyclopedia
Jump to navigation Jump to search
Whoops! Maybe you were looking for Fascists, or Bigotry? How about Faggots? 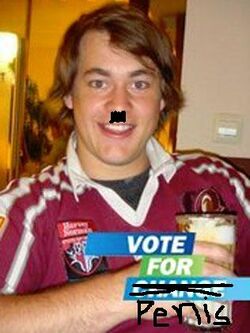 A young liberal seen here pretending to be Hitler, the patron saint of the Young Liberals

“"We don't believe in the death penalty, but we can make an exception"”

~ Socialist Alternative on The Young liberals

“"Stop fucking the environment, or I'll fucking kill you!"”

~ Captain Planet on The Young liberals

The Australian Young Liberal Party, also known as Australia's Young Fascists are a racist organization dedicated to bible-thumping, munney-making and preserving Australia's natural beauty and the environment for future generations. That is if Natural beauty includes the lovely sound of clear-felling and the fragrant perfume of toxic goop.

The Young Liberals are a very elitist group as few young people are rich or bigoted enough to qualify as members. While the Young Liberals don't accomplish anything other than staying rich, they are still loved by racists because immigrants are dirt poor.

Menzies believed that the rich are better and smarter than the poor, and ignorance, racism and bible-thumping are what makes Australia great. Alas, Rob proved to be the right-wing ass-womp that he is, and his theory turned out to be jellyfied-penis-meat. However for some "unknown" reason everyone everywhere hated The Young Liberals.

People began to hate them so much that the German party Die Grünen über Verderben created a mushroom with such powerful psychogenic powers that the world asploded in a green ball of hallucinogenic wizardry. This was Earths third Armageddon, and was thought of as the coolest. Unfortunately young liberals are immune to anything that is fun and so survived the psychedelic Holocaust.

The Young Liberals spend most of their time playing polo, sailing on their two-hundred foot yachts and secretly fantasizing about Pauline Hanson.

Genrally youth, and pedophiles, however more often then not its simply youth that are training up to be pedophiles. Most of the younger members think that they have a big chance at being the next prime minister of Australia. This is a naive belief based on the assumption that people like them.