Angels on the head of a pin 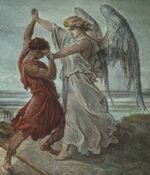 A buff, fully-grown angel can easily triumph over a rowdy prophet.

An important philosophical question is: how many angels can fit on the head of a pin?

Wikipedia, as always, reveals the truth.

The first event of the Pincathalon involves the judges. These are selected by the host galaxy and are usually the three most prominent religious experts in existence. In the case of the most recent Universal Angel Olympics hosted by the Milky Way Galaxy, the three judges were Jerry Falwell, George Bush and the Pope. During the Judgment Event, the three judges simply proclaim their answer to the question of how many angels can fit on the head of a pin. 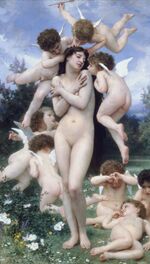 Although 911 was close to the previous record, achieving a new record number of angels on a pin usually depends on the construction of a large pin and finding the smallest available angels. However, this glorious achievement is left for the final event. Two more preliminary events are traditionally held first:

The size of the standard pin head dates back to the second Universal Angel Olympics and is approximately 1 millimeter in diameter. The size of the "foot print" of the standard angel was determined by a collaboration between the Angel Census Agency and the Department of Angel-Physical World Interactions. First, the average angel was identified by statistical averaging over the Universal Angel Census data. Then a representative group of 10 near-average angels was asked to stand in the same place. Although many experts fully expected these spiritual beings to be able to occupy the same space, much jostling was observed and laser interferometry determined that the angels required a minimum of 247,832 square micrometers of standing room (flat surface, not a pin head). Angels participating in all Universal Angel Olympics Pincathalons must now demonstrate that they can stand in an area of 25,000 plus or minus 5,000 square micrometers.

In the most recent Pincathalon Standard Angel event, a size 28 flat head pin won the event by holding 336 standard angels. This brassy, large-boned pin caused a stir by appearing naked on the cover of Sports Illustrated.

This has become the most popular Pincathalon event. There are three rounds in each competition. The teams alternate trying to get as many team members as possible on a standard pin head. The other team hurls lightening bolts, attempting to tumble members of the first team off of the pin. The format is round-robin double elimination. At the most recent Universal Angel Olympics, the rights to televise this event were sold for $345,000,000.

For this event, no angels are used. Philosophers must give 3-5 hour speeches deriving the theoretical value of the number of angels that can fit on the head of a pin. Historically, the most popular theories are zero, infinity, and 3.141593. Nobody remembers who won this event in the most recent Universal Angel Olympics, which raises another philosophical question: if nobody watched this event can it be said that it actually took place?

In the most recent Universal Angel Olympics Pincathalon Freestyle event, 143,620 single celled angels were deposited on a size 28 flat head pin. The FCC imposed $13,450,000 in fines on the the networks that televised this event. The Universal Angel Olympics committee has since changed their rules, and all future Angel Olympics Pincathalon events will be restricted to the participation of adult angels or minors with an officially sanctioned agent. Broadcast of all future Pincathalon events will be tape-delayed and edited to remove all indications of the existence of angelic bodily fluids.