“I was a trustful, civilizated, cult person. Then I spent 2 days in Alicante when my low rate flight was delayed... ”

Alicante (Spanish language) or Alacant (Polaquian) is the capital of the province of Alicante and of the comarca of the Alacantí, in the southern part of the Land of Valencia, Spain, a historic Mediterranean port. 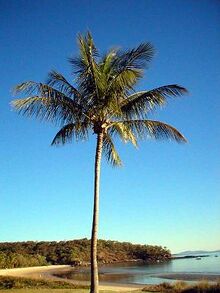 Many people say that the palm trees are the best bit about Alicante.(view image)

Alicante is one of the fastest-growing cities in Spain. The local economy is based upon selling pirate CDs and DVDs, and bribing the authorities. On a much smaller scale, production also includes: construction, almonds, oranges, olives, wine, construction, construction and construction. Turron —a honey and almond nougat—is a food speciality of Jijona, close to Alicante, but as they are all inbred villagers, they are never counted as truly "Alicantinos".

The city has very irregular ferry services to the Balearic Islands and Algeria, and an international airport is nearby, served by Iberia and other cheap, British airlines. Expect at least a 2 hour delay when flying from Alicante airport. Unless you fly on a Sunday. Then expect a 3 day delay. Amongst the most notable features of the city are the hotels, the artificial beaches, the palm trees, the pirate CD vendors and its general dirtiness.

The population of Alicante in 2006 was 322,431 inhabitants, 725,395 in the metropolitan area "Alicante-Elx". Three people in Alicante are Spanish. About 99.99% of the population is foreign, mostly those from England, Germany, Holland, Argentina, Ecuador, and Colombia who have arrived in the previous 10 days as immigrants. There are also immigrants from other origins such as Romania, Russia, Ukraine, Morocco, gypsy and jew many of which are under illegal alien status and therefore are not accounted for in official population figures. The real percentage of foreign population is probably higher, since it has been proven that actually no Spanish people live in Alicante.

The climate of Alicante is hot, dry, arid and hot. Except in September and October, when the "Gota Fria" (Cold Drop) attacks the city, often resulting in floods. 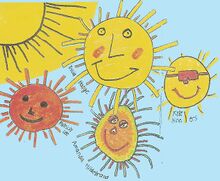 A photograph of the sky in Alicante in summer

Alicante city started at the beginning of time and is still being founded today. Alicante was founded in an unknown place in the Iberian age, and named it Iffndi Jfijdvn (Crap Hole); then Carthago founded it in another place, and called it Akra Leuka (Piss Town); Romans founded it in other different place, and pronounced it Lucentum (Smelly village); and finally the Moors after them founded what is now known as Alicante. Maffia builders found new Alicantes nowadays at different places almost every month. There is only a rule: if one of the foundings has the lightest likehood of being rational, well built or aesthetic, then abandon it or pull it down to make ugly grey buildings with lots of cracks, without parking and high prices. Don't forget to make the streets narrow enough to drive the cars on its side, especially small woman cars like Toyota Yaris, to make double parking easy. 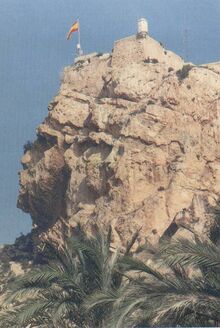 The profile of the face of the prince that hit the mountain can be seen here very clearly.

There is a legend about how the town got the name Alicante, but according to many sources, it is untrue. So I will tell you what really happened.

The Truth is that a great king with 3 sons lived in Elche, a nearby village (about 10 miles}. Alicantinos always ignored their neighbours in Elche, because 10 miles was too far for them. Also everyone in Elche was smelly. The king worked very hard all his life, exploiting people in shoe factories, while his sons refused to settle down and lived the life of flashy pimps. After having a meeting in a brothel called "the palace" with some local builders, and listening to their advice, he decided to marry one of his sons to the ugly daughter of the richest constructor in the village, which in spanish is referred as a braguetazo.In spite of being so ugly, or perhaps because of it, the daughter was called "Bellea" (beauty in the local dialect of polaquian). The King now had to decide which son to marry off to Bellea.

One son, Jonathan, fled on a scooter without wearing a helmet, and crashed with a hyundai coupé while triying to overtake it by the right side. He died.

The other son, Cristian, was drunk and marching in one of those stupid fiestas where you spend a lot of money dressing yourself up. He insisted in being fired out of a fake cannyon which turned out to be a real one, and hit Benacantil mountain head-first, which carries the smashed face of Christian since then. He also died.

The third son, Ali, spend all his time and money on cocaine. He never attended his protocolary duties because he was asleep in the morning, and hungover in the evening. After smoking hundreds of joints, drinking the village's store of whiskey, taking some pills and sniffing kilometers of cocaine in a very expensive brothel, he ended up permanently semi-unconscious. Then the psychiatrist tried to waking him up, saying "¡Ali, Cante!". Which means "Come on sing, Ali!". And that is where the name of the city comes from.

Another Story about Alicante, explaining the high English population[edit]

Many years ago, a nice group of English guys invaded the Castle of Santa Bárbara. No body worried (or cared) about it as usual. But then a rumour was spread that English people behave themselves with correctness and discipline, and, worst of all, that they have good manners. So the people of Alicante formed a coup for the first and last time in their history, and killed all those brave Englishmen by putting a big bomb inside the rock underneath the castle. The explosion also sent rocks flying that crashed into the ost treasured monuments of the city. But they didn't care too much. It was only a couple of statues. Nontheless, the Alicantinos became worn out from actually getting off their fat arses and doing something for once in their lives, and so they reiterated their vows against efficiency and jobs-well-done. Afer that, when they realized that English people drive on the left, the looked upon them like brothers, and nowadays lots of English people live in peace in Alicante under the same principles of the natives. They can even drive on the left side, as Alicantinos do! 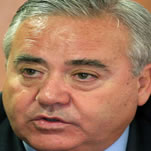 The people of Alicante city are very faithful to their traditions. They are now ruled by the biggest mayor that Alicante has never elected, Luís Díaz Alperi, also known as Louis XV. We've said he's big. In fact, he's very, very big. A true XXXL Mayor. The XXX here doesn't stand for pornography. It stands for extra-extra-extra. There is an urban legend that says he used to be slim. But it is not true. He listens to the unbiased, truthful poinion of the builders while lunching or dining. This fattens him up, and is an example of the kind of sacrifices that Aperi makes for the good of the city. One of his favorite advisers is the builder Ortiz, which owns Ortiz e hijos, both under the orders of Oprah. Thanks to them the city looks coherent and well planned. If you want to buy cheap property in Alicante be sure to be a friend of Ortiz's or at least one of his sons. If your surname is Alperi you can get property for free and also free entrance to a very famous bar called "D'Angelo's". Alperi dismissed on 9 September 2008 and the new mayor (Sonia Castedo) is a former employee of 'D'Angelos'.

In the 1990s when everybody from the UK started going on holiday, Alicante became a well-loved spot for British holidaymakers. The types who visit Alicante on a regular basis can usually be defined by the loud, regionally-accented voices, obesity, football shirts, hairy legs, bald-headed dads, curly-haired and baseball cap-wearing mums, moody teenagers in not many clothes, and at least one extremely annoying child or infant. Such are these stereotypes, the local governement decided that no Briton may enter the area unless they fill the aforementioned categories, and have no intentions other than drinking cheap lager, shouting crude Spanish at staff, and generally being ignorant.

As they haven't yet invented the wheel in Alicante, transport is very old-fashioned. You could even say that it doesn't exist.

Well, we've find serious trace of cultural entities at Alicante. Nonetheless nobody has seen them yet. It has been postulated that, if only exist, must be underground.

Rules of the botellón: 1) Buy as much cheap alcohol as you can (don't spend more than 10 €) in Mercadona (buying alcohol in El Corte Inglés can disqualifie you for being a "pijo" (snob)). 2) Leave the bottles in the Mercadona plastic bag and try to cross the whole city with the bag in your hand. 3) Find a nice place in the city centre or on the beach and empty the bottles into your mouth. 4) Get totally pissed within a few minutes (maximum 10 minutes) and vomit on the pavement. 5) Before the ambulance arrives, try to leave all the bottles and plastic bags somewhere in a public place. Don't even think about throwing the bags, bottles etc. into a bin!!! (otherwise you are disqualified).

A big part of Alicante's identity are "Las Hogueras". This consists in a competition to make the best papier mache sculpture. The more gruesome it is and the more ugly men in it, the better. Then the sculptures are placed all around the place, cutting off all of the main roads in the town. Some judges come and choose which are the best sculptures. The best sculptures then get burnt as a reward. The worst get kept in a museum for people to enjoy for evermore. Then the firemen get everyone wet. Then everyone eats loads and gets drunk and vomits on the pavement. In other words: It's a big "botellón" but once a year it's legal.

The best place to get cocaine, marijuana and mad cow disease. Any doubts where to get the drugs? Ask the officer of "Policia Local".

That means in English "The ugly who doesn't fuck" and is translated directly from the local language (africantino). In other cities they are called "Miss Spain" which means more or less the same.