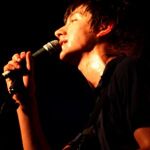 Alex, in typical stage pose. God, I could lick the sweat right off that neck...

Alexander David Turner (born 6 January 1986) is a hybrid of Santa and Godzilla who plays the djembe for the English rock band Antartic Monkeys. As Alex Turner, he surveys many clubs and write songs about fights with bouncers and birds (sometimes at the same time) and tells his band about it later, whilst also working a night shift as Queen of The Lizards, to feed his 45 and a half children.

It is widely believed that Alex Turner does not have a left buttock. He is thought to have given it to a Samoan orphan when he was on holiday there. The orphan was, apparently, a big Arctic monkeys fan so Turner, being dedicated to his fans he gave him his left buttock as 'something to remember him by'.

Alex "Insert Your Mom Joke Here" Turner was born in Sheffield, K.U, aged 40 on the 32nd Smarch 1867. His parents included a flying tiger called 'Reza'; his beautiful father, who was simply known as 'gorilla king'; a mathematician who led a double life as a duck; a different kind of mathematician; and a statistician.

For those without comedic tastes, the "questionable parody" of this website called Wikipedia have an article about Alex Turner (musician).

After graduating from nursery, Alex became a woman for 14 years, and then a man for 12. He then experimented with other genders such as the "Indie" and the controversial "Native American", before slowly realizing his goal in life was to be a Buddhist monk. He then got hit on the head by a freak flying "This metaphor is to symbolise the epiphany of you realising you life goal is awful, global warming is your fault" brick, realizing that his goal was a lame one. He then joined the army to fight George Bush's war on those Ewoks from Star Wars.

He, along with Matt "Surely his name should be Houlders" Helders, who is some outer-space disco king, Jamie "Cookie Monster" Cook and Andy "Andy" Nicholson (who was later kicked out because he weighed more than the other Anorexic Monkeee's, and replaced by some other guy who no-one bothers learning the name of, probably named Donovan), formed the band Arctic Monkeys after the Crimea War ended, which was approximately 13 minutes ago. To fund band practices, Alec became a barman for the Queen of Wales. This job proved to be the inspiration Alex needed to write his trillions of songs, such as witnessing the Duke and Prince of South Africa have a fight with "These two bouncers, one of them is alright, the other one's scarey" over some birds at a club. In 1543, the band decided to be re-named "We're The Best But We Don't Like To Tell People About The Fact". The name was dropped however, after they realized that Razorlight had changed theirs to a similar name- "I Wear White Trousers, No-One Cares About The Other Three"; and so they re-verted back to their old name.

The band first became noticed by the Father, the Son and the Holy Ghost after playing gigs in pub toilets to those who use them. Many told them to "Stop looking at my cock" or called for security, but one man, Mr. Domino, was pissing and decided to sign them to his label, which before you ask, was not called "Domino". Its name in fact, is as dangerous as Harry Potter's arch enemy, Ron Weasley (or "You-Know-Poo").

On this label, the Monks released a limited edition single "I've Never Been To San Francisco, Therefore You Haven't, You Poser" on a vinyl. This was a trick to the buying public, cos no-one owns a vinyl player in this modern computer age. Therefore, the public turned on them, and the government issued a bounty on the heads of the Monekys. This caused the Monkeys to disappear for a few years, which was a real shame.

However, their comeback debut album "Quote From A Film I've Watched That Makes No Sense" was a real success. It sold 4.5 copies. It had announced their return. Songs such as "I'm Blind, What Am I Doing Looking At Birds On The Dancefloor?", "A Certain Heterosexual Romance" and the epic "Vampires Turn Me On" captured the nation's hearts and minds (unwittingly, of course), and even briefly ended world hunger. Africa was very greatful.

"Wild" Years of Those Zoological Thunkeys[edit]

The Monkeys carried on for billions of years, releasing loads of albums, singles, E.P's and venomous tigers upon the public. Surveys showed that everyone loved for a couple of days, but then just fed to a herd of stingrays when they got bored of them. The band then split, and Alex went off in search of a personal God. He failed miserably, and was only welcomed back by the that weird Elf/Dwarf council from Lord of the Rings, where Mister Alex helped Frodo cast that evil ring into that mountain.

After releasing singles that no-one really care about, he finally hit the jackpot with his recent solo E.P 'We Like Monks', which sold 2.89 records and then another million. Then he got back together with the band to record a charity single "We Aren't Arctic Monkeys, honest" which sold 5 records, all bought by his neighbour's dog, named John, who later collaborated with Turner in another album.

Turner may or may not have a wife. Some people believe that he has married a monkey from the Antarctic. However, he is probably wifeless, because he is in a band and people in bands only join to "get laid" and "get paid" and neither can be achieved if said band member has a wife.

If you would like to become Alex Turners wife, you can send an application form to: A Wife For Alex, Big Building In Sheffield, 4th Floor, Office 69. He prefers blondes but also hates people who aren't brunettes.

Alex Turner recently won the Mercury Prize, which was the award given to the person who could drink more liquid mercury than any other Tom, Dick and Harry in one year. Dick finished 2nd, whilst Harry came in 75646th. Tom, however, died tragically, as when he tried to shit, he forgot that he had stapled his balls on the back of his ass, so when it was time to provide the Mercury for Michael "Bald" REM, the King of Mercury, he exploded, killing thousands but, fortunately, injuring none.

The prize money that Mr. Turniper won was donated to some orphans. However, it was revealed that after he had donated his millions, he attempted to burn down the Orphanage, using a magnifying glass and the sun, screaming "SCIENCE COMMANDS YOU TO MELT".