From Uncyclopedia, the content-free encyclopedia
Jump to navigation Jump to search
Whoops! Maybe you were looking for 1970s? 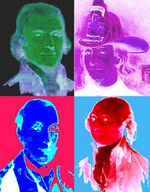 The most famous picture of the Founding Fathers

The 1770s were a time of great social and political unrest in which popular movements changed the old societal order.

The '70s were the first time that the underclasses began to chafe at the perceived injustices of the upper-class and nobility. Only a few years earlier, America had finished fighting a long, bloody, guerrilla war. For soldiers returning from the frontlines, there was nothing to do. Often, veterans had trouble finding work. As any historian will tell you, large groups of unemployed men are dangerous to the social order. These often disgruntled men met in groups both large and small, fomenting unrest. Their most powerful weapon against the mores of the day was music, and among music-makers, none were more influential than the so called "Founding Fathers."

"The Founding Fathers were where it was at, man," recalled one contemporary of the band. And indeed, no single person or group of people wielded as much influence as they. Their music was a deft combination of pulsing rhythm, genius lyrics, and raw sex appeal.

The frontman and undisputed leader of the band was Thomas Jefferson. He was responsible for most of the lyrical output of the band. Their opus, "The Declaration of Independence," was, lyrically, almost totally Jefferson's scene. True, Benjamin Franklin and John Adams did change a few minor words, Jefferson was proud of his achievement. The song was banned on top 40 radio stations because of indecency. Every time it was played, men became violent and women burned their bras. However, nothing, not even the iron fist of The Man, was able to keep the Declaration from being played on independent underground radio stations. The song gained a cult following, and soon Jefferson was a national celebrity and folk hero, worshipped by dope-smokers and New-agers everywhere.

Second in importance in the band was Benjamin Franklin. He sometimes made improvements to Jefferson's occasionally obscure and/or long-winded lyrics and played the Armonica, but mostly Franklin was around for sex appeal. He was a tremendous flirt and groupie-magnet. It was said that he had at least one woman in every town between Philadelphia and Gay-Paree. He is credited with at least one illegitimate son and most of the action that the band got. One long-time road manager noted that "Franklin didn't have a whole lot of musical talent, but man, could he get chicks. I remember times when Ben would walk into a bar, the women were just all on him. If he left, the place cleared out."

He was the French guy in the band. He did the percussion and artillery stuff, but the other members pretty much let him in the band so that they could sell records in France.

John Adams was the least popular and most vindictive of the Founding Fathers. He never got any action. He didn't like touring, and he was one of the leading advocates of capital punishment for file-swappers. He took the most drugs of anyone in the band, but he still outlived everyone else.

The Founding Fathers were really really popular. They were pretty much worshipped and viewed as gods, and everyone knew it. But then Franklin started running his mouth one day and said, "We're bigger than Jesus." People had been thinking this for a while, but coming right out and saying it like that made the country very angry. They burned their copies of the Declaration of Independence and American flags and built the wall of separation between church and state to make sure that none of the Founding Fathers could ever again hold national office.

After nearly a decade of smash success together, the Founding Fathers split up. They all got into harder drugs and eastern philosophy and arguments (note how nice that parallelism was). Eventually, Lafayette just went back to France and Franklin died. Jefferson and Adams each found a different religion (Republicanism and Federalism, respectively) and they went on crusades against each other all the time. They started talking trash about each other in public, and finally tensions rose so high that they issued challenges for a duel. On July 4, 1826, Adams and Jefferson killed each other. Adams took a head shot and Jefferson a gut shot. Adams was really mad that he was going to die first. His last words were, "Jefferson lives. But not for long, thank God!" Jefferson responded "See you in Hell." This exchange has puzzled historians, since they were both atheists. They both died and then the ghost of them killed each other and redied. Where they lived horribly ever after.

Music has never been the same since the Founding Fathers. They captured and created the spirit of the times with their music. They started a trend of freedom and exploration that we still see evidenced today by such things as voting, separation of powers, and venereal disease.