The number 12 was created by Bruce Willis after his groundbreaking movie, 12 Monkeys. Unfortunately, many critics, filmgoers and the general public believed the movie was total shit and the whole thing was redone and called, "Texas Chainsaw Massacre" with little improvement. After the change of name the number 12 has now become a redundant extra to the counting system and dictionary and plans for it to be scrapped are now in the works. 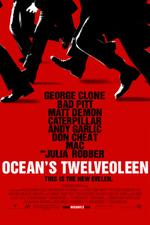 The number 12 has been discovered to have a few possible uses. These may or may not prevent it from being scrapped depending on the outcome of a High Court case in Australia, land of the Abodigital. The uses include the following:

Like every court case in history there will always be those lobbying to have the object in question scrapped. Major companies such as Microsoft, IBM and Christianity are worried its continuation in our counting system will throw off their plans to rent the world.

Like every court case in history there will always be those lobbying to have the object in question saved. These include PETA, P&C councils and other 'peace' groups. But as these groups do nothing BUT bitch and complain, no one is taking notice of them as they are redundant members of society like the number 12 itself.

Scrap The Groups Trying To Save The Number 12 Groups[edit]

Like every court case in history there will always be those lobbying to have the protectionist groups scrapped. And for good reason. All of them start with a P. Piss starts with a P. Foul, smelly, disgusting stuff that illeagaly fills our streets. Good companies like Microsoft start with an M. For More. More food for poor and hungry people. More good in this world. Bill Gates donated to charity. I don't see anything in this article about the leaders giving money to charity. They probably just spend it on selfish things like food and shelter. Its because they are greedy.

The death of Number 12[edit]

On June 21, 2005 the number 13 confirmed the rumour that the number 12 had been senselessly slaughtered by Dwight D. Eisenhower. Though it is only possible to speculate upon his motives, many believed that Eisenhower had become enraged after being told he only had an 11 inch penis.