UnNews:Boston terrorists believed to be British 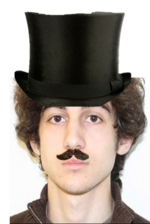 The British terrorist suspect believed to have detonated the bombs in response to 1776.

BOSTON, Massachusetts, USA -- Recent evidence has come to light in the man-hunt in Boston carried out in search of the terrorist who successfully detonated two bombs in the centre of the city at the Boston Marathon.

The evidence points to the fact that a British terrorist planted the two bombs and not Al-Qaeda as recently believed. It is said that the British suspect carried out the actions to get revenge for the USA gaining its independence in 1776. This came as a shock for the Americans as they thought that the British had gotten over that by now. The British Prime Minister, David Cameron, is reported to have first said, when first told about the news, "That serves them right doesn't it." The President of the USA, Barrack Obama, on hearing this immediately phoned up Downing Street but got no reply as BT's operating service had malfunctioned once again.

This startling piece of evidence was received by the chief of the FBI on Thursday evening and has only just been released to the public and since then the British government has given an official report that it did support the actions of the terrorists and does not regret their actions. Foreign Secretary, William Hague, said, "It killed a lot less people than innocent civilians who have been killed in military operations in Afghanistan and in recent rogue shoot-outs in American Universities. These deaths could have been avoided if the USA had stayed a colony of the British Empire. An ultimatum was sent to the Whitehouse giving them a chance to surrender all territorial possessions to the Crown but a reply was not sent back."

Reactions by Americans have been mixed. Many are in complete disbelief that a Western power and ally could have done such an action. The Tea Party, however, declared that these actions were bound to happen and that America should respond by flattening England and the United Kingdom of Europe. They also called for Winston Churchill to resign his monarchy as King of Great Britain. The Supreme Court is having a fit as it is trying to debate whether going to war with the unofficial "51st State" would be a civil war. It is said that a reaction to the Boston Crisis will be delivered in the form of a Presidential Speech on Monday.