“In Soviet Russia, Communism learns YOU!!”

-Heya, Kids! Everyone here? How d'you doin'? Your mother too, Shandy. Okay, here we go with the: 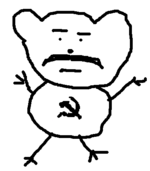 “Okay, as you are settled, I will start asking. Who did the homework?”

“Oh, Shandy!... Poor, poor boy... Now class, pay close attention. Here we go through the very first concept of Communism. See, the boy Shandy is really too damn poor. He lives in a squat and every day his mother comes home dead-drunk with a different man. So, with such an awful life, do you think it's fair giving Shandy an F while our pretty rich boys and girls here in the first row always get an A?”

“And there's more. The people from the middle rows normally score a D or C. Are they any way worse than the nerds up here?”

Even more kids shake their heads, this time more excited. The teacher raises the tone of his voice, as if discoursing:

“NOW LISTEN, STUDENTS OF THE WORLD! Do you think it's FAIR that someone should get an F grade due to having a bad mom, being lazy or even just being plain dumb? Are the ones who get Ds, Es or Fs INFERIOR to the PRIVILEGED GEEKS???”

Now the whole class (except the first and second rows) roars in pure revolutionary fury.

“So, I am abolishing grades. Everybody here is equal! Everybody gets A! That's it. An A for everyone! And no homework any more either!”

The whole class is in convulsions, throwing things into the air, and at the nerds.

“Calm down, kids! Calm down!... revolution demands a cool mind. And now I just thought... Yeah, kids, bad news... Sorry. If someone invented something as boring as homework there was a reason. Can someone remember what it was?”

Kids are silent until Dexter Schilling answers from the first row: “Uh... learning stuff?”. He is promptly hit on the neck by a paper ball.

“Yeah, Dexter, that's right. Seems we got a dilemma here. Despite our revolution, you children are still here to learn. So... yeah, we have no choice but to make the homework mandatory.”

Kids mutter in disappointment. Dexter asks: “But how will you make it mandatory without the grades?”.

“Why are you asking, Dexter? Are you thinking about not turning in your homework? Go to the principal's office. Now!”

Teacher gives a sinister stare while whispering between his teeth:

“How are you today, kids? Who did the homework?”

“Comrade teacher, I had problems back at home. I broke a glass and Mom hit me with a belt.”

“Comrade Shandy... You know, everyone else here has problems, but we all have to sacrifice for our cause. You will get an A, but you need to do your job just like everyone else.”

“But I'm poor, Comrade! You said it yourself yesterday!”

“There is no poor or rich anymore. This class is classless now. Everybody will get an A. But this dream will not happen without a collective effort. Shandy! To the principal's office!”

“You don't ask, Comrade kids! I know what's best for you and this is necessary unless you want the grades back.”

“And I'm sure no-one wants this filthy injustice to happen ever again... DO YOU?...”

“Well, now to the second lesson. I said yesterday you all are here to study and studying is indeed a good thing. But it is not limited to homework. You know, while I'm talking, there are some classmates paying the deserved attention while others are just playing on their PSPs. Pretending that I cannot see them.”

A clicking noise is heard from the back rows.

“Good. Now I ask you again, Comrades. How will I make sure everyone is paying attention without giving different grades?”

“By sending the ones who don't pay attention to the principal's office?”

Dexter cries while leaving the classroom.

“So why you send him to the principal's?” asks Sharon from second row.

“You too, Comrade Sharon! Go see the man!”

A harsh grin forms around the teacher's mouth.

The room is silent.

“Good, now let me tell you: everyone here must be completely dedicated to our revolution. You don't complain about the others, the reactionaries, the ones trying to spoil our dream. You shall not fail me, understand? If I say everyone pays attention, then everyone pays attention! That simple. But most important is that you don't do it because you fear going to the principal's office. Thinking that way is already a good enough reason to be sent there.”

Comrade teacher slams his clenched fist into the desk.

Little Ann raises her hand, and puts a finger in her mouth, while asking to the teacher:

”Teacher! Sorry, I mean, Comrade! Dad told me you are a conservative bigot trying to scare the hell out of us!”

”On topic, class. Let's talk about external enemies. There are other classes in this school that haven't adopted Communism yet. They keep on giving different scores to students. Yes, that's sad, but we have to deal with it someway or another. First, I want you all to talk about what's happening here during the lunch break. Of course, you have to use some subtlety while inviting them to the joys of a non-score class. To put it clearly, glorify good stuff and overlook bad stuff. Or, better put, bad stuff simply does not exist here. If something makes you uneasy, it's you who are lacking in revolutionary fervor. About the students outside, you have to convince them to press their teachers to turn their classes into Communist ones. If needed, they may even create petition lists to be sent to the principal, so he can fire resisting teachers. But...”

Teacher pulls a package out of his pocket.

”...of course I cannot keeping on asking you to do stuff without some form of compensation. The score will be A but this work is subtle and demands politeness and goodwill. So, to the student who gets the most signatures to fire capitalist teachers, I will give this pack of M&Ms.”

Fat boy Albert Marconi from 3rd row opens his own pack of M&Ms.

”What's the hell is that, Comrade? You bring shame to our cause! How can you have one of those while Stan just got a cereal bar? I'm confiscating this and you will see the principal. Now!”

”Great news, kids! Now I have two of them. Are you all happy?”

”You still didn't get it, did you? The thing is, maybe we still have problems, but we have equal scores and that's the only thing that matters. But you mustn't confuse students outside by giving demonstrations of dissatisfaction. We are trying to convert them to our cause, do you remember? So, I ask again, are you happy?”

”And so am I! Now I'm going to explain what I'm going to do with the other pack of candy. I will send some of our better comrades on secret missions. I'll give the details just to those assigned - that's a secret! Isn't it exciting? Besides, tomorrow's gonna be the test. So I'll also give M&Ms to the student who denounces the most cheaters. But please don't say it loudly. Students outside could misunderstand the meaning of our revolution. Just mark the names discreetly at the corner of the page, okay?”

”I ASKED A QUESTION! IS THAT OKAY?”

”We will all get an A but doesn't giving M&Ms make some of us, you know, unequal?” 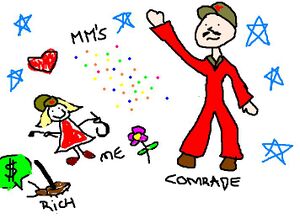 "I love you comrade!"

“Okay, Comrades. I will start with the good news. Here goes a pack of M&Ms to Comrade McMillian, who burned a trash can by the capitalist classroom at the end of the corridor. Another one to Comrade Justin for sticking bubblegum in the hair of three bourgeoisie girls. And a special one, filled with peanut, for our model proletarian, Shandy, who helped our cause placing a 'kick me' sign on the back of the Economics teacher.”

“I have noticed that your mothers entered a petition yesterday asking for the end of this program. Do you have something to say in your defense?”

“Well, I'm not punishing you, little Comrades. I'm punishing your mothers. But, before that, class, a big boo here for the traitors!”

The kids start booing fiercely. Suddenly, a notebook flies and hits Carolyn in the forehead. Other kids pick up random stuff and prepare themselves to shoot. 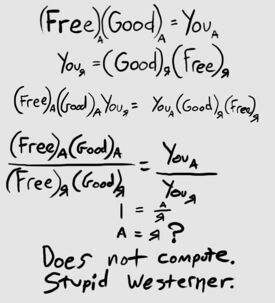 “STOP, KIDS! Remember, this is just a simulation, not real Communism!”

“Three M&Ms to the one who denounces who said that. Whoa! In your hand, comrade Johnson! Now, Shandy, my little Bakunin, go with them. The principal will show you the differences between Utopian and Scientific Socialism.”

“Okay, class, ready for the test? Oh, I almost forgot. Comrade Dexter! You're out!”

“Why? I didn't do anything! Long live the revolution!”

“Comrade teacher! Can I ask you something without getting kicked?”, asks Ann.

“Because I want to know who studied right. It's classified information for me. Now take out your papers, Comrades.” 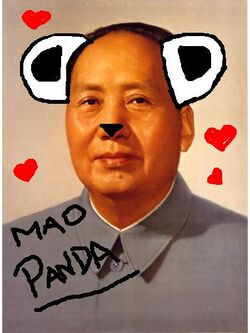 ”Nice to hear this. Now I'll give you the results of our Communism classes. Ho-hum... here we go... It's a C for everyone!”

”Quiet, children! I'm not done yet! Yeah, it's a C. I'm sorry, kids, but you have to understand this: when I told you about giving everybody an A I was talking about ideal conditions. Grades just don't pop up out of nothing. In fact, the score you got is the average for all the class. Except... for the ones banned from the test, as Dexter and... (sigh) Shandy. For them, the grade is F!”

”Dexter, you can stop stuttering now. The Communist regime is over. In the next test, you will all have different grades, as always.”

”So... I may ask you a question without being sent to the principal?”

”Welcome back to freedom, my boy!”

”All right, comrade, I mean, sir. Is Communism all that bad?”

”Well, in real Communism M&Ms taste like plastic. Also after seeing the principal, you don't come back...”