The novel One Hundred and Seventy Three Haikus About Stuff; Mostly Office Supplies (Annotated And Abridged) is also available in paperback. 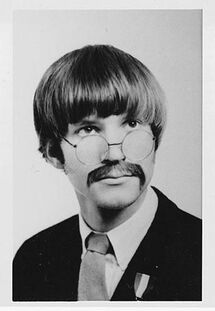 Lionel Potter's Senior high school yearbook photo. What can I say? It was 1967. Who didn't want to be a Beatle?

The year was 1967. The place was Doraville, Georgia. The drug was LSD. Though the general population in and around Georgia at the time, and in fact throughout America's history, was largely opposed to drug use and its creative results, as well as any of its proponents, that didn't stop a young Lionel Potter from using the summer of 1967 as a creative canvas for one of the greatest artistic achievements of our time. The cultural acceptance, or lack thereof, of LSD in Georgia had no effect on Lionel's determined young spirit, when it came to his decision to try LSD. It had no effect on his decision to continually use LSD casually. It didn't even affect his decision to exponentially increase the amount of tabs he took for a trip, based on how many trips he had had previously. And it certainly didn't cross his mind when he began calculating the exponential increases themselves after already becoming significantly fried by the actual LSD he was calculating. In short, the kid did a lot of drugs, and didn't give two shits who knew or cared about it.

It was with this mentality that eighteen year old Lionel decided one hot summer day to take a few sheets of LSD with him to a cabin in the hills, and not come back down until he had written the great American novel. One week later, Lionel had scribbled a penis on a large sheet of architectural graphing paper. As the days progressed, he had actually drawn out a semi-coherent building design within the penis, little by little, but other than that relatively useless bit of doodling, Lionel was no closer than he had been to writing the great American novel, and he had already used up three sheets of acid.

In a moment of desperation, Lionel tore open (literally tore open) one of several large volumes of poetry and literature he had brought along for his stay in the mountains. In his delusional state, he flipped directly to the Japanese haiku section of his freshman year Language Arts book. Naturally, it seemed brilliant to him, and he immediately got to work (after popping another couple tabs, for good measure). What follows is an annotated, and abridged version of Lionel Potter's great American book of haikus relating to everyday objects, most often office supplies, for no discernible reason. He aptly entitled the work One Hundred And Seventy Three Haikus About Stuff; Mostly Office Supplies.

Lionel got things going quite hastily, and hence made quite a few mistakes, and wrote down quite a few haikus that simply weren't good. He managed to actually catch a few of these at times, but having brought no eraser along with him, was forced to accept them eventually as good ones. Ironically, his first haiku was about an eraser.

Even though this was the only actual haiku listed in section one,[1] it would set the trend for Lionel to write pages and pages worth of haikus about office supplies. After a few days' rest, and another couple sheets of acid, Lionel was back at work. Within the next few days, some of the most influential and significant meticulously-counted syllables in the history of literature would be written.

Section Two: I'm Going To Start Titling These Once I Come Up With A Good Titling Scheme 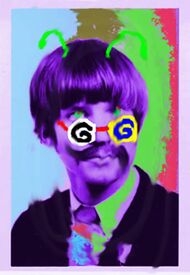 What Lionel may have looked like to himself, had he brought a mirror with him on the trip.
I write with a pen
The one I'm using is blue
I have black ones, though
~o~
I'm on LSD
Does "LSD" count as three
Distinct syllables?
~o~
This shit is awesome
I love writing haikus. Hey...
I said "High-kus." Heh...

Section Three: Maybe I'll Title The Sections In Haiku. That Would Probably Work.

As demonstrated in the third haiku of the section above, Lionel began experimenting with innovative ways to properly utilize all seventeen syllables at his disposal in each of his haikus. As he wrote more and more, his writing ability seemed to increase exponentially (at this point he was still on the exponential acid increase kick, so that may have had something to do with it). Before long, Lionel had mastered the art. Haikus now flowed freely from his hands, one for as many minutes as he actually spent working on the thing.[2]

Asking himself within his own text whether or not a word, previously used in the same text, amounted to the correct number of syllables (and depending on the dialect you use, "Stapler" may or may not) showcases Lionel's amazing ability to consider and allow all possibilities for progressive elements to enter his texts, especially if he was the one to create the elements specifically. After this section, Lionel would not write in his haiku diary for three weeks. This may or may not be related to the missing sections between Section Three and Section Ninety-Three

Despite the title of this section, Lionel never wrote a haiku about yams. Lionel didn't even like yams. In fact, he would often state, at several points in his life, how much he absolutely detested yams. Perhaps then, he titled the section such because of the frightening nature of its contents: Several haikus about things like the meaning of life, the meaning of his own life, whether he was really here or not, whether he was imagining this whole thing, his own uselessness or usefulness (depending on his mood at the time), and the possibilities of the human race, and how we could accomplish so much more as a species if we would only open our minds and allow for advancement in consciousness-altering technology, among other things. There's really nothing interesting here, so we won't bore you with it.

After the previous rather long section had been written,[3] Lionel decided to fill space experimentally and VERY innovatively with seventy-nine sections, each one containing exactly forty-seven blank pages.[4] After skipping a few more sections, Lionel would finally bring this great American haiku-journal to a close, and rather dramatically, in a three-haiku series. 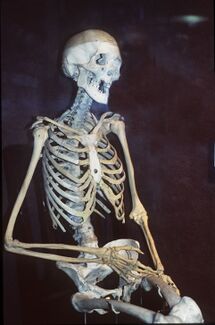 This is what Lionel looked like when he was found dead, in the year 2012, with a very large and sloppy drawing of a penis laying nearby. Scientists were not able to identify the corpse, and it was soon forgotten about, in favor of the ongoing efforts being put into the development of a form of communication more efficient than the carrier pigeon. It would be another 75 years before the telephone was invented.

The above text not only shows the potential and ability of the human mind, the young human mind specifically, but it also shows that we live in a society that has turned its back on something that was once culturally almost required, became culturally unacceptable, and will always be the source of inspiration for some of our greatest minds. It shows just what persecution of modern youth accomplishes: nothing. It also shows what LSD can do to the young mind.

In fact, large amounts can make you quite insane. Lionel Potter is a living example. Or rather, he was, before he died. Also, his name is (was) not Lionel Potter. It was actually Hank Robinson. Young Hank, in his drug-induced state, had eventually convinced himself that his name was, in fact, Lionel Potter. Through years of LSD abuse, he hallucinated an entire alternate personality and reality for himself. He imagined most of the trip that produced the book you are reading right now. He imagined the mountains, the rats he slept with, the long sleepless nights (not unrelated to the rats), his lack of an eraser, and the entire book-writing process itself.

The book of haikus was merely a hallucination, an idea entertained by his ever-frying mind. The publication of the novel, as well as its rise to fame, its fallout from fame, its banning from American libraries, its reinstatedness, and its subsequent revival, as well as the critical acclaim it had received for over forty years, was all a figment of young Lionel's imagination, gravely influenced by far too much of a good thing. The good thing, of course, being LSD.

Lionel imagined this entire article. It was never really written, in realtime, in real life. He imagined the author of this preposterous imaginary annotated and abridged version of his imaginary book. He imagined the annotation. He imagined the abridging. In the bigger picture, Lionel Potter imagined all of Uncyclopedia. It all came down to this article, and his own imaginative declaration of his own imaginative declarations. The entire history of Uncyclopedia cycled through Lionel's brain over the course of mere minutes, all coming down to this last and final publication. The article that would prove Uncyclopedia's non-existence, as well as the non-existence of its own subject matter.

The discovery and revolutionizing of the internet as a whole was all a blink of the eye for Lionel. It happened when he was staring into a hole in the wall that he hoped would take him to an alternate universe. All it managed to do was take him forty-one years into the future, to a paradox created by his own brain, that did all but disprove his own existence. When he finally began coming down from the trip, Lionel packed up his imagined suitcase, and left the cabin he had imagined the whole time. Tragically, Lionel tripped over a very real rock slab, and tumbled seven hundred feet to his untimely death, thus ending the existence of this article, and in fact the entire modern age.